The UbiSlate 7Cx will be the cheapest tablet in the Indian market with cellular connectivity. Innovation can take many forms. Some companies do so in design, others within technology itself. But for DataWind, the company behind the Aakash tablets, the innovation is always in the price and designing a product to fit amazingly low price points.

CEO Suneet Singh Tuli always emphasised the importance of bringing down barriers for adoption of technology. If he tried and, as some would say, failed to do this with the world's cheapest tablets in the Aakash, the entrepreneur from Canada is now bringing affordability to commercial tablets too.

DataWind on Wednesday announced the UbiSlate 7Cx, which will be the cheapest tablet in the Indian market with cellular connectivity at Rs 3,999. This price point is Rs 1,000 cheaper than the company's UbiSlate 7C+ which was till now holding this spot. 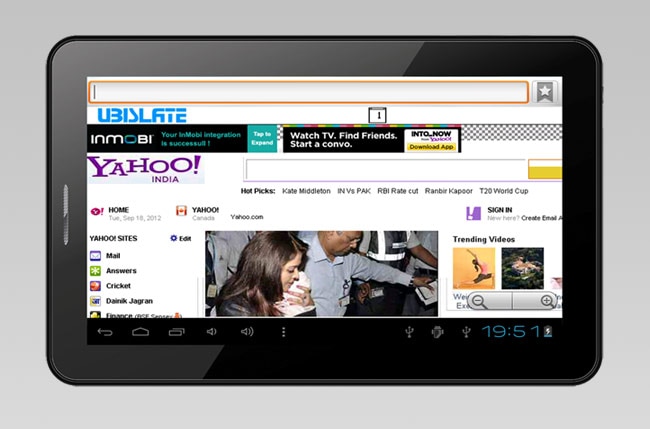 The UbiSlate 7Cx will be the cheapest tablet in the Indian market with cellular connectivity.
The 7Cx will be on regular GSM-EDGE based networks and use Datawind's unique data compression technology to offer a decent browsing experience. The company also announced the UbiSlate 3G7 which at Rs 6,999 bring 3G access. Both are seven-inch tablets.

For those looking for a large screen, the UbiSlate 9Ci will be available for under Rs 5,000 but with only Wi-Fi access. The UbiSlate 9Ci will be available for under Rs 5,000
In a release, Tuli said the company was committed to bringing affordability in computing and internet access to India's masses "despite the recent drop in value of the Rupee".

Launched just weeks before Diwali, the company is promising to deliver the tablets within five days of the order on their online portal. Along with the regular Android-based smart features, the tablets will come preloaded with free ebook apps for NCERT Class I to XII in English, Hindi and Urdu; English learning tools; antivirus & anti-theft pack by E-Scan; MapMyIndia Navigation and games.
Tags: Datawind | Suneet Singh Tuli | Ubislate 7Cx | Ubislate 7C+ | Ubislate 9Ci

reQall Rover: The app that organises your day