Google has unveiled a souped-up line of Nexus tablets to take on iPads and a new device, called Chromecast,  which makes it easier for people to access Internet content on their TVs.

Google is betting consumers will pay slightly more for a sleeker, more powerful version of its Nexus 7 tablet as the Internet company escalates its rivalry with Apple and Amazon.com in technology's key battleground - the mobile computing market.

The fancier devices unveiled on Wednesday in San Francisco will go on sale in the US next Tuesday in Google's online store and numerous retailers with brick-and-mortar stores.

Among other things, the souped-up line of Nexus tablets will boast a higher-definition 7-inch (17.5-centimeter) display screen and a processor that promises to be nearly as twice as fast. Dual stereo speakers have been added for richer sound, and the device's battery duration has been extended to 10 hours for Web browsing, an increase of about an hour.

On other fronts, Google Inc also unveiled a gadget that will lean on its widely used Chrome Web browser and take aim at Apple on another front - the living room. 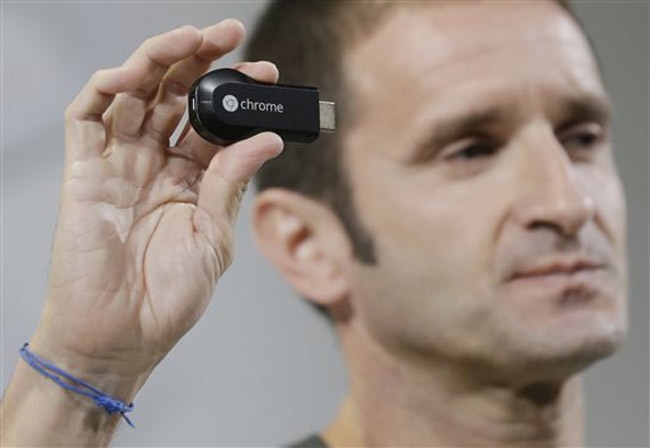 Google's new Chromecast device is shown by Mario Queiroz, vice president for product management, on July 24, 2013, in San Francisco. (Photo: AP)
The new device, called Chromecast, is part of the company's attempt to make it easier for people to access Internet content on their TVs. Chromecast is a small stick roughly the same size as a thumb drive that can be plugged into an HDMI port on flat-panel TVs. It brings Netflix, Google's YouTube site and other Internet content to what is usually the biggest screen in households.

Forrester Research analyst Sarah Rotman Epps said Chromecast could undermine Apple in the still-nascent market to plug streaming devices into TVs, just as the Nexus tablets have siphoned some sales away from Apple's iPad.

Google's previous products designed to connect TV sets to the Internet haven't worked out well. The company initially tried to embed an operating system called Google TV into sets made by TV manufacturers, but that flopped. Last year, Google introduced an orb-like device called the Nexus Q in hopes of delivering more Internet video to flat-panel TVs, only to quickly pull the product from the market.

"Chromecast looks like a smart and disruptive device," Rotman Epps said. "Maybe it took the other failures for Google to get it right."
Google wants to have a presence on TVs because it could open up a lucrative new channel for it to sell more ads, which bring in most of its revenue.

In a show of its determination to make inroads on TVs, Google started selling Chromecast for just $35 on Wednesday. That price undercuts the most popular Internet-streaming devices made by Apple and Roku. An Apple TV box sells for $99, while the least expensive Roku box capable of showing high-definition video goes for $80. Roku, a company that formed within Internet video subscription service Netflix Inc., also sells an Internet streaming stick similar to Chromecast for $100.

Earlier this year, Apple revealed that it has sold more than 13 million of its streaming boxes. Roku said its sales of streaming boxes surpassed 5 million units this year.

The Chromecast device connects with smartphones, tablets and personal computers to beam Internet connect to TVs. The Apple and Roku streaming boxes rely on a standard remote control to select Internet content.

As an enticement to get people to try Chromecast, Google is offering three months of free Netflix service with a purchase of the Internet-streaming stick. That translates to a $24 value, leaving the cost of the device at $11 for those who would have gotten Netflix anyway.
As for the Nexus 7, the extra firepower added to the second generation of the tablets will come with a higher price. A model with 16 gigabytes of storage will sell for $229. That's still 30 percent below the $329 that Apple Inc. charges for its iPad Mini. A comparable Kindle Fire HD tablet from Amazon.com Inc. currently sells for $199.

The price hike for the Nexus 7 comes at a time when more people have been showing a preference for less expensive tablets. Google helped propel the trend with last year's introduction of the Nexus line, contributing to pressure for Apple to come out with the iPad Mini as an alternative to its top-selling tablets with a 10-inch (25-centimeter) screen.

Google is confident the Nexus 7 will still look like a great value once consumers see how much more powerful the new models are, said Sundar Pichai, an executive who oversees the company's Android and Chrome software.

The iPad Mini has driven down the average selling price of Apple's tablets, hurting the Cupertino, California, company's profit margins.
Even at a lower price, the Nexus tablets haven't been as popular as the iPad. Pichai said the Nexus products account for about 10 percent, or 7 million, of the roughly 70 million tablets now running Android software.

In the first half of this year alone, Apple sold 34 million iPads, including full-size models.

Amazon.com doesn't disclose its sales of Kindle Fires, which run on a modified version of Android. The research firm IDC estimates about 1.8 million Kindle Fires were sold during the first three months of this year.

The Nexus 7 will be the first device to get the 4.3 version of its Android software. It's a relatively minor upgrade from the "Jelly Bean" flavor of Android. Google still hasn't said when it will release a more comprehensive Android overhaul, currently known as "Key Lime Pie."
As with the original line of Nexus 7s, the new devices are being made by AsusTek Computer Inc., working from Google's design.

Google is still tinkering with a new line of Nexus tablets with 10-inch display screens. The Mountain View, California, company also hasn't updated its Nexus 4 phones, though it worked with phone makers to release variants of Samsung's Galaxy S4 and HTC's One this summer. The variants run a pure version of Android, without the customizations added by the phone makers.
Tags: Google | Apple | Nexus 7 | Netflix | Chromecast