The smartphone, priced at Rs 7,349, will provide a powerful entry to Windows Phone 8.1 with a Quad Core processor delivering faster and smoother user experience. 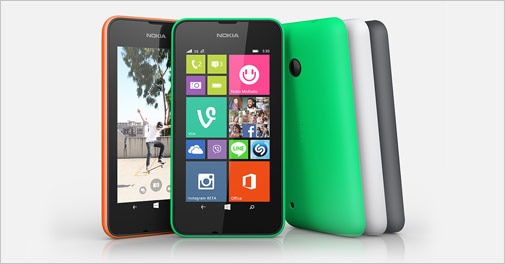 Microsoft Devices on Wednesday announced the launch of most affordable Lumia 530 dual SIM smartphone for Rs 7,349 in India. Previously, the Lumia 520 was the cheapest smartphone in the company's Lumia portfolio. The device is currently retailing at about Rs 8,000.

Microsoft Devices said Lumia 530 will be available in stores at a best buy price of Rs 7,349 starting August 14. The new Lumia 530 will provide a powerful entry to Windows Phone 8.1 with a Quad Core processor delivering faster and smoother user experience, among others, it said in a press release.

"This device will expand the reach of Windows Phone as it allows more people to enjoy Lumia innovations and Microsoft services similar to those offered in high-end Lumia smartphones," the release added.

The affordable smartphone segment is growing exponentially, driven primarily by youth who are constantly looking out for smartphones with power-packed features at affordable prices, Nokia India Marketing Director Viral Oza said. Nokia India is a subsidiary of Microsoft Mobiles Oy.

Lumia 530 builds on the legacy and success of Lumia 520 and will help Microsoft Devices consolidate its position in this segment further, he added.

IN PICS: WHAT THE NEW NOKIA LUMIA 530 OFFERS

With its innovative design, the latest Windows Phone 8.1 and signature Lumia experiences, the Lumia 530 3G dual SIM is the perfect device for those who are looking for a distinctive smartphone, Oza said.