Justin Denison, a senior vice president of mobile product marketing, showed a prototype with a screen of 7.3 inches. When folded in two it appeared to resemble a thick phone. 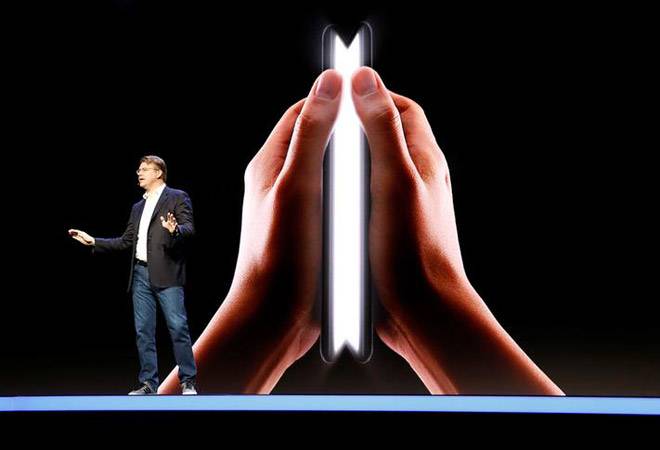 The South Korean tech company needs to get the foldable phone right to reverse steep declines in profit for its mobile division and restore some of the cachets its brand has lost to Apple Inc.

Foldable phones promise the screen of a small tablet in a pocket-sized device.

Folded in two it appeared to resemble a thick phone, but Samsung did not give media or developers a chance to touch or see the device up close.

"We expect to see foldable products from several Android manufacturers," he said.

Google's head of Android UX, Glen Murphy, was also on stage with Samsung and said Google would work with the developer community to bring more features to the phone.

Samsung said it would be ready for mass production in the coming months.

Developer Joshua Clark, who was at the conference, said Samsung needs to sell the technology to its competitors for the product to be widely adopted.

"I really think it only takes two companies, and then all of a sudden it will catch on," said Clark. "And the fact that Google was on stage, that says a lot. For developers to be able to integrate it with all their apps, that gives me a lot of confidence."

Analyst Bob O'Donnell with Technalysis Research said that while the bendable screen provided a wow factor, shoppers may not like the thickness of the folded phone or its price tag.

"They'll have to prove that it's more than just a gimmick," said O'Donnell. "But it's smart to open it up to developers early to do different types of experiences."

Maribel Lopez, an analyst at Lopez Research, said that the product would likely be relatively expensive in the near term.

"We're talking about brand new materials that have been made for this and also a new manufacturing process," said Lopez.

Samsung is among a handful of developers working on foldable phones.

China's Huawei Technologies Co Ltd [HWT.UL] has said it is planning to launch a 5G smartphone with a foldable screen in mid-2019.

Samsung and Huawei, however, have been beaten to the market by Royole, a Chinese display making start-up, which last week unveiled a foldable Android phone with a 7.8-inch screen, priced from around $1,300. Royole said it would start filling orders in late December.

Google says use dark mode to save battery on Android phones