The Note 3 is now thinner and lighter than its predecessors though the display size has been increased to 5.7 inches with a slimmer bezel. 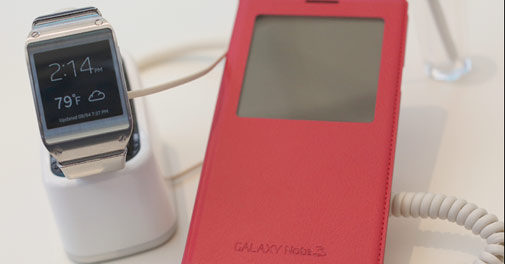 Samsung launched the Galaxy Note 3 and its Galaxy Gear smartwatch at the 'Samsung Unpacked 2013' event in Berlin on Wednesday.

The Note 3 is now thinner and lighter than its predecessors though the display size has been increased to 5.7 inches with a slimmer bezel. The company has replaced the plastic back with a soft textured back cover along with a serrated pattern on the side that make it feel like a diary.

Samsung's S-Pen functionality has been beefed up as its new Air Command feature can now open a palette of five tools to use the Pen in a better way. Depending upon the launch market, the Note 3 will be powered by 2.3GHz quad core Qualcomm Snapdragon 800 SoC or an eight-core Exynos 5 Octa chipset with 3GB RAM. Running Android v4.3, it will also have a 13 MP rear camera with smart stabilisation, 3200 mAh battery and will be available in either 32/64GB internal storage.

The new phablet starts shipping by the end of this month and is likely to be available across the world in October.

Samsung also announced its smartwatch, the Galaxy Gear. Unlike what was rumoured, the Gear has got a 1.63 inch Super AMOLED panel with 320x320 pixel resolution. It also has a 1.9MP camera with auto focus and BSI sensor and can shoot videos at 720p. There are two inbuilt microphones and a speaker for calling. The watch is powered by an 800 MHz processor with 512 MB RAM and has got 4GB of storage.

When connected to a smartphone, it can show notifications for incoming calls, texts, emails and alerts. The Gear also offers message preview feature. The smartwatch connects over Bluetooth and supports third party applications as well. The Galaxy Gear will also give access to the smartphone features such as features like S Voice, Find My Device, and a pedometer.

At the moment, the smartwatch will only be compatible with the Samsung Galaxy Note 3 and the Galaxy Note 10.1, announced at the show. But Samsung will release the software updates to make it work with the Galaxy S4, Galaxy SIII and even the Note II.