Lenovo is upping the ante against the bigwigs in the gaming phone market with the upcoming Legion Phone that will debut this month in China. Lenovo has announced it will launch the Legion Phone on July 22. The Chinese brand has been teasing its first gaming smartphone under the popular Legion branding for a while where it outed some information on what to expect from the upcoming gaming phone. But its fresh announcement gives away more details, such as the Lenovo Legion Phone will feature the brand-new Qualcomm Snapdragon 865+ processor to offer high-end gaming. Coincidentally, Asus is launching the ROG Phone 3 in India the same day and with the same chipset.

The launch date was revealed by Lenovo in a post on Weibo where it shared a poster of the Snapdragon 865+ chipset inscribed with the details about the upcoming Legion Phone. The event is slated to begin at 7.30 pm Beijing time, which translates to 5 pm IST. The same day, at 8.15 pm, is the launch of Asus ROG Phone 3. So we can expect a showdown between the two gaming smartphones later this month. Lenovo has not said anything about the availability of the Legion Phone outside of China. 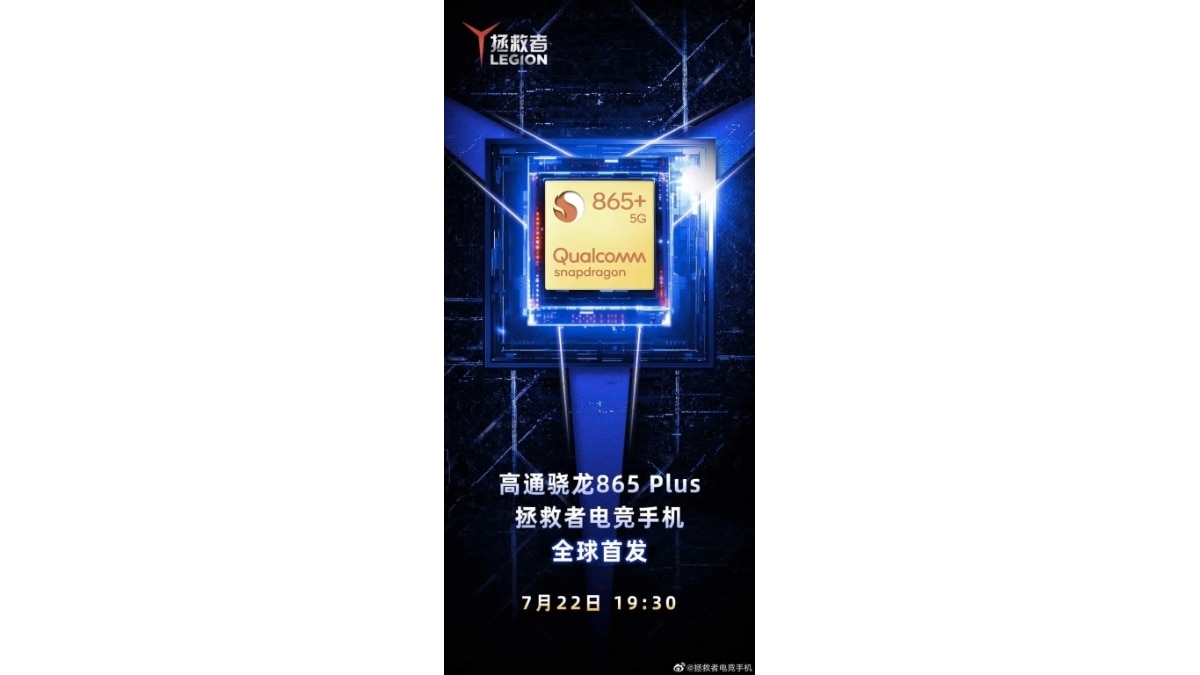 It will be an important launch for Lenovo after years of tries that the company has made to exist in the smartphone industry. Its various smartphones waned too soon, not only in India and other international markets but also in China. But unlike its smartphones, Lenovo's PC business is thriving in China, India, and other markets. In fact, its range of Legion high-end gaming laptops have carved a niche for itself. The company is now leveraging the Legion branding to push its gaming smartphones in the market that is rife with the likes of Asus ROG Phone and Nubia Red Magic.

Lenovo is going for the high-end innards on the Legion Phone, including the top-notch Snapdragon 865+ processor that was launched earlier in the day as Qualcomm's most powerful chipset to date. It is packed with the best 5G modem and other connectivity features that will be more than enough for a gaming phone with most 2020-esque standards. We can expect a high refresh rate on the Lenovo Legion Phone display -- something sort of 144Hz -- and an FHD+ resolution.

Previous leaks have suggested the smartphone will be more suited for handholding vertically. Which is why the leaks have shown the Legion Phone with a pop-up camera on the side of the smartphone -- in a rather unusual setting. The AnTuTu benchmarking website has spilt the beans on what else you can expect from the Lenovo Legion Phone. It could come with 16GB of LPDDR5 RAM and 512GB of UFS 3.1 internal storage. A report previously stated that there could be a 64-megapixel main camera that will be situated on the dead centre of the smartphone's back to facilitate the vertical operability.