LG has announced a new flip phone called Folder 2 and it will be available in Korean markets. 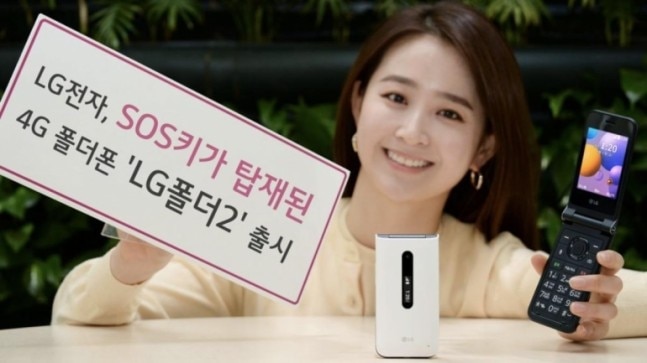 LG is overhauling its smartphone portfolio in an attempt to bring out the distinction in the design that is being commonly followed by its rivals. But it is seemingly paying attention to the entry-level market as well. The South Korean company has announced the LG Folder 2 flip phone, which is the successor of the LG Folder. The LG Folder 2 has been launched in Korea for now and it is unlikely to make it to other markets. The highlight of the flip phone is the SOS key that can be assigned to a specific contact.

The LG Folder 2 flip phone is priced at KRW 198,000, which is roughly Rs 12,400. The phone will be available via three carriers in Korea starting July 17. It comes in White and New Platinum Grey. As we said, it is not clear if LG would choose to bring the Folder 2 to other markets as well.

The LG Folder 2 is a flip phone, which employs the traditional way of opening the phone by flipping either part to reach the main display. There is a 2.8-inch QVGA display on the Folder 2, along with a T9 keyboard. There is also a secondary 0.9-inch monochrome display on the front side of the top flappable part for notifications, call alerts, and texts. The Folder 2 is powered by a Qualcomm Snapdragon 210 processor under the hood, paired with 1GB of RAM and 8GB of internal storage. It supports 2G/3G/LTE networks in Korea and has Wi-Fi, Bluetooth, and an FM radio. A 1470mAh battery fuels the Folder 2 device. The LG Folder 2 also has a 2-megapixel rear camera.

There is an SOS key located at the back of the phone. It can be programmed to dial a contact when pressed three times within 1.5 seconds. The SOS key can be used for when there is an emergency -- it is similar to how the panic buttons have been introduced in all phones in India. The SOS button also shares the location of the device with the assigned contact via a text message. Another feature is the Hotkey, which is placed above the call button on the main dialling pad. It can be pressed to summon the AI voice service or start voice recording. The AI voice service can be used to ask the weather, temperature, date, time, and simple calculations. "If the phone operation is clumsy, it can be solved by voice, it is convenient," LG said in a press statement.

Ola launches emergency services in Gurugram: Here is how you can avail it