LG has not given the two devices any names yet but they seem to have an imminent launch. 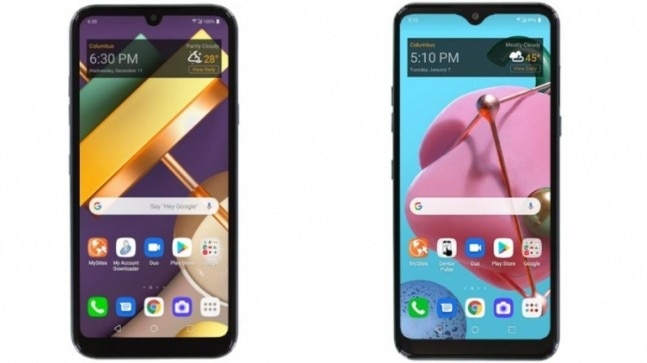 While LG does not like to inundate the market with back to back smartphones, it has a reasonably good number of handsets across price ranges. The South Korean electronics giant is purportedly working on two new smartphones that will bear a water drop-style notch display. The two smartphones bear model names L555DL and L455DL but their commercial names are not known as of now. The two phones come with a very similar design, wherein the notch houses the selfie camera while a thick chin is visible at the bottom.

The two smartphones by LG have been leaked in press renders shared by renowned tipster Evan Blass on Twitter. Blass shared the model names of both the phones. He also tipped that LG's upcoming smartphones will be available in the US via Tracfone as a part of the carrier's contract. There is no information if the two smartphones will make their way outside the American market.

The renders show a run of the mill design adopted by LG for the two smartphones, wherein a dedicated Google Assistant button is also given on the left edge, just below the volume rocker. The power button is on the right edge of both smartphones. While the renders show just the fascia of the smartphones, there should be a 3.5mm headphone jack on either the bottom side or the top side. The chin on the smartphones looks old-fashioned, somewhat like the one on Pixel phones.

Coming to the interface, both the smartphones pack LG's UX that is based on Android 9 Pie. The company is still to widen the rollout of Android 10 on its devices, which is also when these two smartphones could get the update.
LG has not said anything official on the two upcoming smartphones. The pricing for the devices is also under wraps for now. Going by the look of the devices, the best guess is mid-tier pricing. However, the readers are advised to take this with a pinch of salt since the specifications are not available for the two devices.

Own an iPhone 11? You probably don't know how to switch it off