Facebook CEO and co-founder Mark Zuckerberg had caused a stir on social media when he posted pictures of his two goats and shared the names of his new friends. 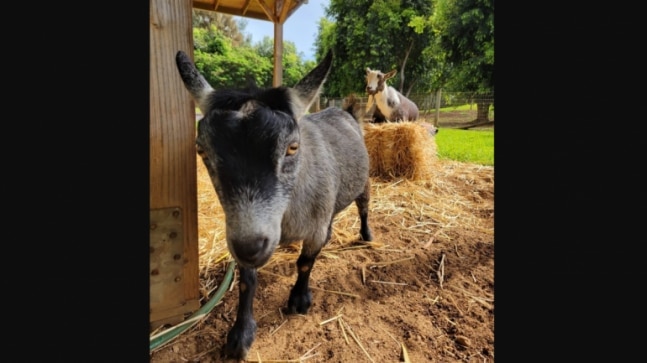 Facebook CEO and co-founder Mark Zuckerberg had caused a stir on social media when he posted pictures of his two goats and shared the names of his new friends. Well, it wasn't clearly the picture of the goats that grabbed everyone's attention it was the names- Max and Bitcoin. Cryptocurrency has become one of the most talked-about things on social media ever since Tesla honcho Elon Musk endorsed it. So is Zuckerberg hinting at something more concrete by naming his goat bitcoin?

Cryptocurrency enthusiasts were quick to conclude that Zuckerberg is endorsing Bitcoin, while many thought he is hinting at launching his own digital currency. There were some users on Twitter who also thought that Mark could be making a Bitcoin investment. His post kicked up a meme fest on Twitter, but a set of users were genuinely concerned about the fate of Bitcoin- the goat, not the digital currency.

Mark Zuckerberg has in the past killed his goats and eaten them. The revelation was made by none other than Twitter CEO Jack Dorsey. During an interview with Rolling Stone, Dorsey revealed that Zuck had once killed a goat and served it to him for dinner. Dorsey called it his "most memorable encounter with Zuckerberg."

Explaining how he kills a goat, Dorsey said that he uses laser guns and a knife. He then sends the carcass to the butcher. "I go, "We're eating the goat you killed?" He said, "Yeah." I said, "Have you eaten goat before?" He's like, "Yeah, I love it." I'm like, "What else are we having?" "Salad." I said, "Where is the goat?" "It's in the oven." Then we waited for about 30 minutes. He's like, "I think it's done now." We go in the dining room. He puts the goat down. It was cold. That was memorable. I don't know if it went back in the oven. I just ate my salad," Dorsey narrated the story. This incident took place in 2011 when Zuckerberg had pledged that he would only eat animals that he kills.

This little piece of history about what Zuckerberg eventually does to his goats left the Twitterati worried about the fate of his goats Max and especially Bitcoin. The users wondered whether Mark would kill Bitcoin like his other goats or will he be kept as a pet. Well, only Mark himself can solve the curious case of Bitcoins.