The Facebook CEO has been spotted in a whole new avatar in a new viral video. 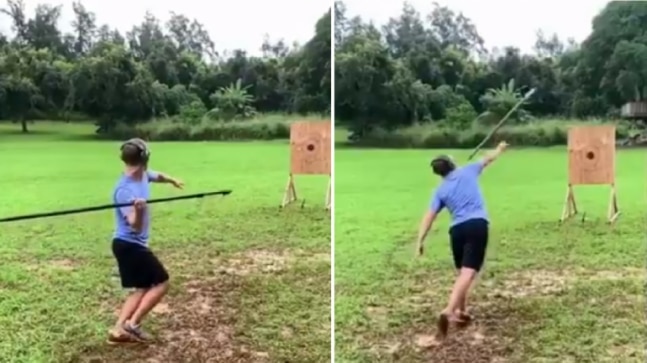 Facebook CEO Mark Zuckerberg is often in the news for updates related to his social media platforms. The tech entrepreneur, however, is now gaining the spotlight for a completely different reason. In a new viral video, Zuckerberg can be seen attempting to throw a spear on a target as practice.

The video is a refreshing change from the usual events that bring Zuckerberg's name to the headlines. Shared by Twitter user Gene Park, a games reporter at The Washington Post, the video shows Zuckerberg in casuals, practising the spear throw and practically acing it.

The video spans just under one minute and shows the Facebook CEO on a field in front of a wooden target. Holding a spear in one hand, Zuckerberg advances with a couple of steps to throw the spear in the direction of the target. It is amusing to see that the throw is spot on, missing the bull's eye by mere centimetres.

The whole video progresses in slow motion to accurately track the spear throw. Adding to its gravitas is a background score of Show Me How To Live by Audioslave to give off a vibe of an action-packed sequence showing the Facebook CEO in a whole new avatar.

The video has gone viral since its upload on the microblogging platform. Responses from the Twitterati, however, have been varied in nature. While some appreciate the change from the usual stuff Zuckerberg is linked with, others criticise him for all the issues he has been associated with in the past. Another striking thing that people noted in the video is the use of earmuffs by Zuckerberg during the spear throw. Many have tried to assume the reason why he needed to wear ear protection while throwing a spear, but no one seems to have a reasonable explanation as of now.

It seems like only Zuckerberg can elaborate on why he was attempting to do what he did here. Is the video a part of Zuckerberg's regular practice sessions? Is it a one-off recreational thing for the Facebook CEO? We hope to find more answers to this when the world-renowned tech innovator cares to share his experience in detail.

Also read: | Facebook appoints grievance officer for India to comply with new IT rules
Also read: | WhatsApp working on flash calls but iPhone users might not get this feature