A new leak shows the image of the handset revealing its colours and the design, along with the camera set-up on the device. 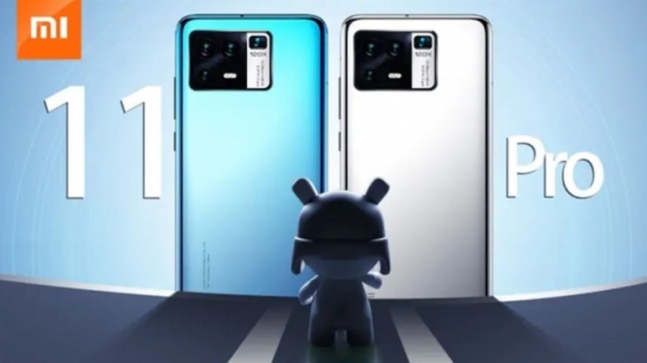 Xiaomi recently launched the Mi 11 flagship and since then there has been a lot of chatter about the company launching a Mi 11 Pro smartphone to follow it up. Earlier a report by tipster Digital Chat Station suggests the phone could be launched in China in February 2021. The tipster known for his accurate leaks about Xiaomi phones and other products has not given an exact date but does say that the Mi 11 Pro is being prepped for a launch after the Chinese Spring Festival -- mid-Feb.

And now, a new leak shows the image of the handset revealing its colours and the design, along with the camera set-up on the device. The Xiaomi Mi 11 Pro is expected to be an upgraded model of the Mi 11 with images suggesting that the phone will have a quad-camera setup at the back with a periscope lens.

The leak comes courtesy of MyDrivers which has shared a poster of the back panel of the Xiaomi Mi 11 Pro. As pern the leak, the device will come with a large rectangular camera module placed horizontally with four sensors inside it. Three of these sensors will be placed in a horizontal line, of which one is a periscope telephoto lens capable of 120x zoom. The fourth sensor sits below these three alongside the flash.

Apart from this, the leak does not reveal anything about the Mi 11 Pro. While there is no clue about the specifications of the Mi 11 Pro, we can expect the phone to share specifications with the Mi 11 which features a 6.81-inch display running a maximum resolution of 3200x1440 pixels and capable of 120Hz refresh rate. The panel also supports 480Hz touch sampling rate and is covered by Gorilla Glass Victus protection.

Underneath we have the Qualcomm Snapdragon 888 SoC, coupled with up to 12GB of RAM and 256GB of internal storage. The phone also comes with an in-display fingerprint scanner and a heart-rate scanner.

As for cameras, there's a triple-lens set-up at the back that features a 108-megapixel primary sensor with f/1.85 aperture, a 13-megapixel super-wide-angle lens with a 120-degree field of view, and a 5-megapixel telephoto-macro lens. Selfies are handled by a 20-megapixel camera.