Mi 11 Ultra India launch soon, here is what we know so far

Mi 11 Ultra will be introduced on April 23 and will compete against other premium offerings like OnePlus 9 Pro, Samsung Galaxy S21 Ultra and Vivo X60 Pro+. 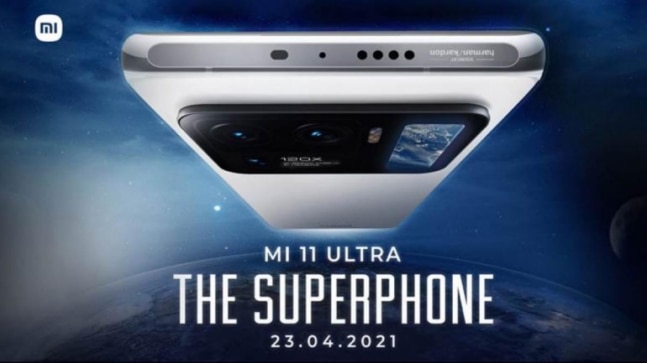 Mi 11 Ultra is expected to be one of the most expensive Xiaomi smartphones in the country so far.

It comes with specifications like Qualcomm Snapdragon 888 SoC, up to 12GB RAM, a curved 120Hz QHD+ display, a 108-megapixel main sensor and a one-of-its-kind secondary display at the back. Interestingly, the smartphone maker is yet to unveil the Mi 11 in India first smartphone that packed Snapdragon 888 processor. With only weeks left for Mi 11 Ultra launch, here is a look at everything we know so far.

Unlike pricing, the features and specifications of the phone are already known. Mi 11 Ultra comes with a 6.81-inch sAMOLED display with QHD+ resolution and a 120Hz refresh rate. The display is protected by Gorilla Glass Victus. The smartphone is powered by Qualcomm Snapdragon 888 SoC, with up to 12GB of LPDDR5 RAM, and 512GB of UFS 3.1 fast storage.

The smartphone will be in direct competition with Samsung Galaxy S21 Ultra, OnePlus 9 Pro and Vivo X60 Pro+. The Samsung smartphone is the most expensive of all but, comes with similar features. It will be interesting to see if Xiaomi ships it phone with a charger or not. The decision can give it an upper hand on Samsung.

Both OnePlus and Vivo smartphones focus on cameras. OnePlus has entered a partnership with Hasselblad while Vivo is now working with Zeiss. Xiaomi has also made few changes to its camera system. It is promoting the Mi 11 Ultra as a phone where all three lenses can work as the primary camera. The camera performance will decide if Mi 11 Ultra can compete with OnePlus 9 Pro and Vivo X60 Pro+.

Also Read | Mi 11 Ultra can be Xiaomi's most expensive smartphone in India till now
Also Read | Data of 533 million Facebook users leaked online, here is how you can check if you are safe
Also Read | Sony A7S III review: The mirrorless magic