Mi Band 6 just arrived with a couple of upgrades. We decided to pit it against the Mi Band 5 to find out if it is any better. 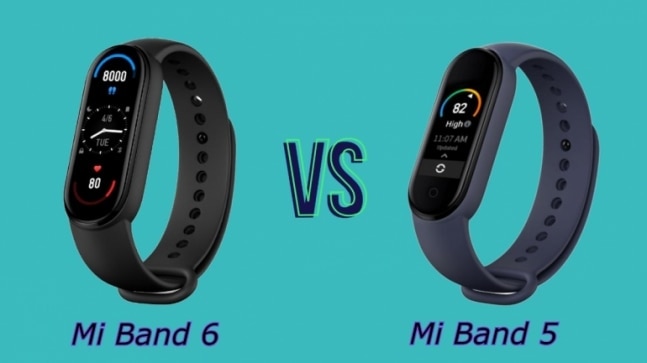 Xiaomi's Mi Band series has served as an ideal smart band for consumers on a tight budget. The brand recently dropped the Mi Band 6 alongside the flagship Mi 11 series. It features a bigger and better resolution 1.56-inch AMOLED display. Moreover, it gets SPO2, a heart-rate sensor for blood oxygen levels and 24-hr heart rate tracking. Xiaomi Claims that the Mi Band 6 can run up to 14 days on a single charge in normal mode, which is the same as Mi Band 5.

As far as the design is concerned, it's hard to tell the two fitness bands apart. The Mi Band 6 looks almost identical to the Mi Band 5. However, there's one big change, the latest Mi Band gets a 50% bigger display than the previous iteration.

Mi Band 5 brought a major change in the charging system allowing the band to be charged without being popped out of the silicone straps. The same design change has been brought to the Mi Band 6 too.

Other design elements on the Mi Band 6 remain as it is. The Mi Band 6 is 12.7 mm thick, while the adjustable strap is 159mmto 219mm. Much like the Mi Band 5, it is also 5 ATM water-resistant, meaning it can survive for up to 10 minutes in 50m deep water.

Xiaomi has also used a toughened tempered glass with an anti-fingerprint coating on the Mi Band 6. Hence, it should be less prone to scratches and fingerprints.

First, the Mi Band 6 can track up to 30 sports activities and intelligently track six activities, including running, walking, indoor treadmill, and cycling. Whereas the Mi Band 5 can only track 11 activities.

Both the smart bands come with blood-oxygen, heart rate and sleep tracking features. In addition to sleep tracking, the Mi Band 6 also tracks the user's breathing quality while sleeping, which was not possible on the Mi Band 5. For your information, the SPO2 sensor was first introduced to Mi Band 5.

Also, both the Mi Band 6 and Mi Band 6 bring support for Bluetooth 5.0.

In terms of battery, the Mi Band 6 ships with a 125mAh battery which is the same as Mi Band 5. According to Xiaomi, the battery can be charged in less than two hours, providing the smart band with a battery life of 14 days on normal usage and up to 19 days on power-saving mode.

Even the Mi Band 5 provided a similar battery, so there's no change even here. The Mi Band 6 borrows the magnetic charging tech from the Mi Band 5 that allows the smart band to be charged with the strap intact.

The Mi Band 6 is currently available in China, pre-orders of which began on the launch date, i.e. March 29, 2020. It is slated to go on sale on April 2 in China.

We do not know so as to when the Mi Band 6 will be made available in India. However, we can expect it to launch soon in India, considering the brand's history of launches,