This will be Xiaomi's first 75-inch smart TV in India and is likely to be its most expensive as well. 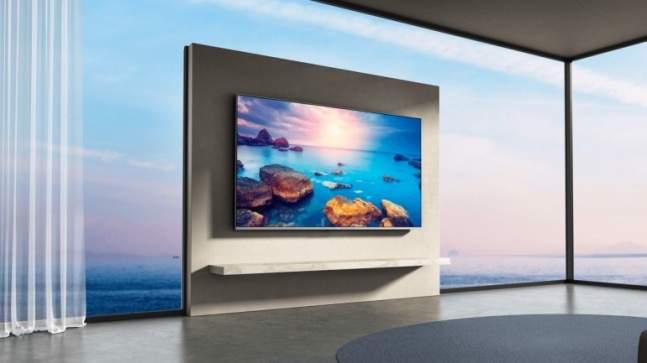 Xiaomi is likely to equip the TV with a 30W stereo speaker system.

Xiaomi is launching its largest smart TV in India on April 23. The Mi QLED TV 4K 75 will be launched alongside the Mi 11 flagship smartphones in the country on the mentioned date. This will be Xiaomi's first 75-inch smart TV in India and is likely to be its most expensive as well. The Chinese manufacturer had started selling televisions in India in 2018 and has expanded its range over the past three years. It started selling TVs under the Mi branding but had introduced the first Redmi TV last month to target the more aggressive price points.

Xiaomi has made it clear that Mi TVs will now target a more premium market and the two line-ups will be distinguished by the end of this year. The Mi QLED TV 75 will be the 75-inch TV Xiaomi introduced in China earlier this year. However, it is expected to make few changes and customisations for the Indian market. These can be on both software and hardware front.

As mentioned before, the Mi QLED TV 75 can be the most premium Xiaomi television in the country. In Europe, the Mi TV Q1 75-inch is priced at EUR 1,299 (roughly Rs 1,14,300). Xiaomi claims that the TV has been entirely Made in India which will help it keep the cost competitive. Yet, it should cost over Rs 1 lakh, given the increasing price of smart TVs in the country.

The Mi QLED TV 75 is likely to carry forward most features from its global variant with few small changes. It should feature a 75-inch QLED 4K UHD (3,840x2,160 pixels) resolution display with quantum dot technology. It comes with a 120Hz refresh rate, razor-thin bezels, a contrast ratio of 10,000: 1. The TV is equipped with dynamic local dimming, Dolby Vision, and HDR 10+ support globally.

Xiaomi is likely to equip the TV with a 30W stereo speaker system which makes use of six speakers — two tweeters and four woofers. It comes with Dolby Audio and DTS-HD support. The Mi TV is powered by 1.5 GHz MediaTek MT9611 processor with 2GB of RAM and 32GB storage.

The connectivity options include one HDMI 2.1 port, two HDMI 2.0 ports, two USB 2.0 ports, dual-band Wi-Fi and a 3.5mm headphone jack. There is a dedicated Auto Low Latency Mode for gaming.

In terms of customisations, you can expect few changes to the Patchwall. This might include integration with the Mi Home app as we saw on the recently launched Redmi TV. The official pricing and features of the phone will be unveiled on April 23.