Xiaomi has introduced its largest and most premium smart television in India during its Mi Mega Launch event on Friday afternoon. 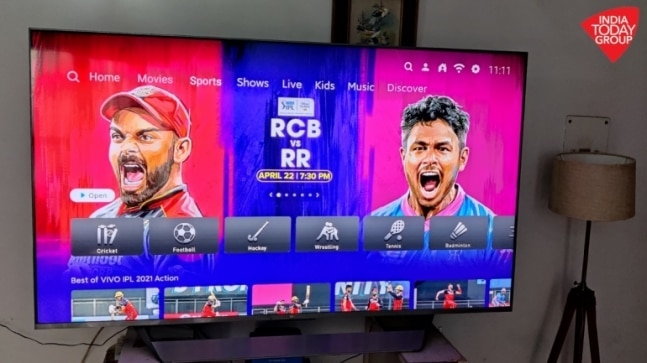 It is company’s largest and most premium smart TV in the country.

Xiaomi has introduced its largest and most premium smart television in India during its Mi Mega Launch event on Friday afternoon. The online launch event also saw the unveiling of Mi 11 Ultra, Mi 11X and Mi 11X Pro. All three smartphones are positioned in the premium category, at different price points though. Meanwhile, the Mi QLED TV 75 marks Xiaomi's entry into the big screen television market which currently has limited players in the country.

The new television comes with a 4K UHD panel with 120Hz refresh rate, support for Dolby Vision and HDR 10+. The television has Dolby Audio and multiple connectivity options. Xiaomi had last month introduced its first Redmi TV in India. It aims to target different price points with Redmi and Mi TVs, with the latter focusing on more premium set of users.

Mi QLED TV 75 price in India has been set at Rs 1,19,999. This is more affordable than 75-inch smart TVs from other brands like Samsung and Sony. Xiaomi has started making its smart TVs entirely in India which is helping it keep the cost down. The customers can also get Rs 7,500 instant discount if they make the purchase using HDFC Bank cards. However, the 75-inch smart TV category remains to be a niche, and it will be interesting to see if Xiaomi manages make inroads or not.

The Mi QLED TV 75 runs Android 10 OS and bundles Netflix, Amazon Prime Video, and YouTube apps. It also has a built-in microphone for hands-free control on Alexa and Google Assistant voice commands. This is Xiaomi's first smart TV with Alexa support. For audio, the Mi QLED TV 75 is equipped with a 30W stereo speaker system which includes two tweeters and four woofers. It has Dolby Audio but supports Dolby Atmos on compatible audio devices through HDMI.

The connectivity options of the Mi QLED TV 4K include Bluetooth 5.0, an HDMI 2.1 port, two HDMI 2.0 ports, two USB ports and a 3.5mm headphone jack. There is also built-in Chromecast.

Apple working on iMessage upgrades for iOS 15, may make it better than WhatsApp for iPhone users