Forza Street has a street-racing interface that is filled with a narrative-drive campaign. 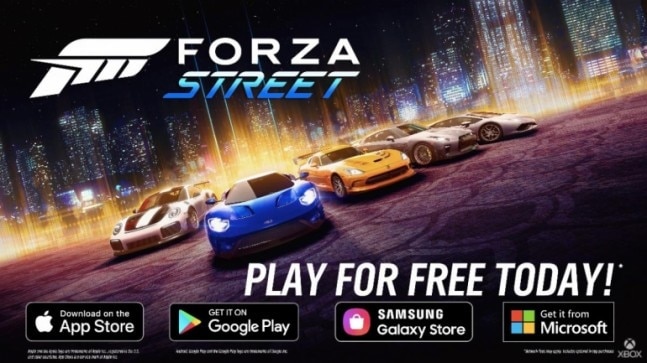 Forza Street is now available to download on iOS and Android for free. Microsoft's free-to-play racing game was first introduced for Windows 10 about a year ago and its arrival on smartphones was announced alongside the Galaxy S20 series earlier this year. It borrows its essential elements from Microsoft's hit game franchise Forza, such as racing car customisations, tracks for simulated driving, and car collections. The Android and iOS counterparts of Forza Street have in-game purchases for exclusive offerings, as well.

Now available on App Store, Google Play Store, and Samsung Galaxy Store, Forza Street is about 2GB in size. The game can be signed-in using the Microsoft account, Apple's Game Centre, and Google Play account. There is also the Xbox Live sign-in option available to sync the game progress across various platforms. There are in-app purchases, as we said, ranging from Rs 170 to Rs 8,500 per item in India (as seen on the Google Play store listing). The purchased items will be available across all platforms, which means the player does not have an already purchased item for when the game is being played on a different platform.

Microsoft is also doling out complimentary freebies with Forza Street for Android and iOS. People who play install and play the game starting today till June 5 will receive a unique Ford GT, whereas those who downloaded the game from Samsung Galaxy Store can unlock a 2015 Ford Mustang GT with a custom Galaxy-themed paint. Since Microsoft made big announcements at the Galaxy S20 launch event, people with a Galaxy S20 series phone will be able to unlock a 2015 Chevrolet Corvette Z06 within the game, in addition to extra credits and benefits.

According to Microsoft, Forza Street was designed "to be an evolving experience." It is a game based on street racing that follows a storyline, filled with characters and a narrative-driven campaign, weekly "Spotlight Events", and a limited time Themed Events. "For players looking for an additional challenge, weekly Rivals events let them take their collections against other players in the community in leaderboard based asynchronous challenges," said Andy Beaudoin, Turn 10 Studios Design Director, in a press statement.