The Microsoft Surface Dock 2 is a minute upgrade over the previous-generation model. 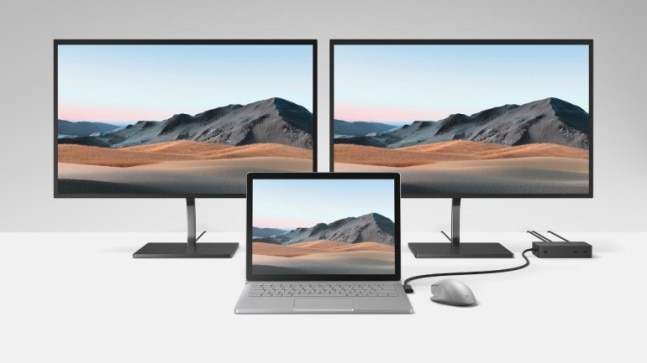 Microsoft launched new Surface products on Wednesday, including the latest Surface Book 3, the Surface Go 2, Surface Headphones 3, and Surface Earbuds. There was another product that, although not as high-profile as others, makes the Surface line-up complete and easier to use Microsoft launched the Surface Dock 2 docking station with a number of ports. It is an upgrade over the original model, Surface Dock, but comes with certain improvements. Microsoft has also launched a USB-C Travel Hub and two new keyboard and mouse kits called Microsoft Ergonomic Desktop.

Microsoft has also announced two new keyboard and mouse kits. One of them is wired while the other one is wireless. The Microsoft Ergonomic Desktop comes with a long wrist rest and a curved design to allow the natural posture of hands when typing. The keyboard has both alphanumeric keys and the number pad, in addition to Microsoft's own dedicated key for emoji and an Office key. There is also an ergonomic wired mouse in the kit. The wired kit costs $89.99 (roughly Rs 6,800). There is a wireless kit has a regular-sized keyboard and a mouse. The design of both items is pretty ordinary and they together cost $59.99 (roughly Rs 4,500).