After saying goodbye to Calibri as its default font, Microsoft has released a list of fonts that will become the new default for all Microsoft services. 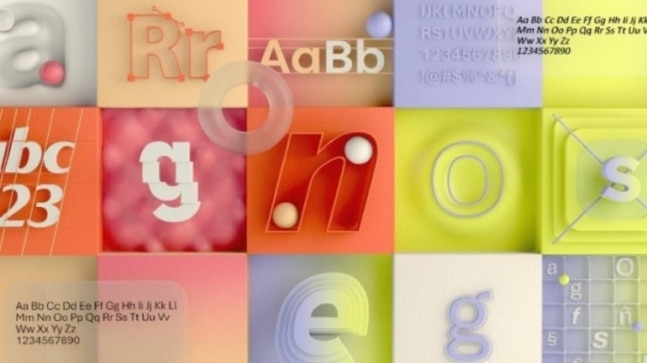 Announcing a major upgrade to its visual representation tools, Microsoft has unveiled five new custom fonts to be used across its services. Out of the five, Microsoft will decide one be its next default font for all Microsoft products in the coming months.

The list of font candidates comes as the company bids goodbye to Calibri, its default font for all things Microsoft since 2007. Calibri stepped in to replace Times New Roman at its time and now will be replaced by one of the five fonts as shortlisted by Microsoft here.

"To help us set a new direction, we've commissioned five original, custom fonts to eventually replace Calibri as the default," Microsoft noted in a recent blog. Through it, the company has shared the fonts with its users across the world and will decide on the ultimate one through user inputs and its own deductions.

Here are the five fonts that Microsoft has shortlisted -

Much like sans serif, Tenorite comes with elements like large dots, accents, and punctuation and is comfortable to read at small sizes onscreen, Microsoft notes. Its "crisp-looking shapes" and wide characters create a "generally open feeling," it states.

Taking cues from mid-20th-century Swiss typography, Bierstadt is a contemporary sans serif typeface. The font aims to bring simplicity and rationality in a highly readable form. Bierstadt can be seen having stroke endings that emphasize order and restraint. This type of font would be good for grid-based typography. Bierstadt is named after one of Colorado's 14,000 ft peaks. "When I think of Swiss type, I think of the Alps, and since I'm based in Boulder, my Alps are the Rockies," the author Steve comments.

Skeena brings a contrast between thick and thin, having modulated strokes with a distinctive slice applied to the ends of many of the strokes. It has been described as "humanist" sans serif based on the shapes of traditional serif text typefaces. The author says that Skeena is ideal for both body text in long documents, as well as in shorter passages often found in presentations, brochures, tables, and reports.

Seaford brings back the comfortable familiarity of old-style serif text typefaces. It contains organic and asymmetric forms to help emphasize the differences between letters. This, in turn, creates more recognizable word shapes.

Derived from classic German road and railway signage, Grandview is a sans serif typeface designed to be readable at a distance and under poor conditions. The legibility of Grandview extends from use in body text to long-form reading, thanks to subtle adjustments it sports. Microsoft says that all five fonts are now available via the cloud across Microsoft 365 apps and experiences. Microsoft users can use these fonts from now on and share their love for their favourite one through social media.