Microsoft Word, Excel updated to give PC-like functionality on iPad

Microsoft has quietly updated the Word, Excel, and PowerPoint apps for the iPad. 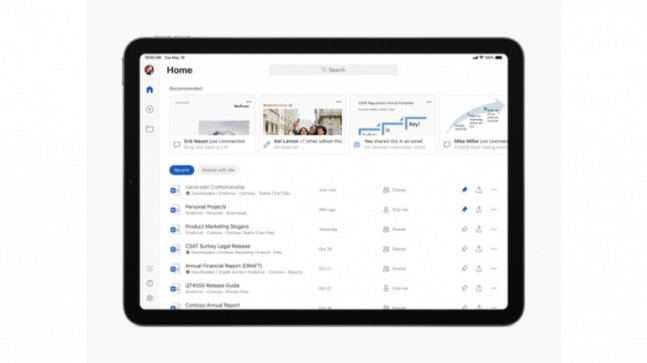 Apple has always wanted its iPad to turn into a full-fledged laptop and Microsoft is helping it achieve that. It has quietly updated Word and Excel for iPad to support mouse and trackpad, bringing Apple's tablet closer to becoming a MacBook. This means that you can now scroll and hover around using the trackpad and the mouse connected to your iPad, unlike previously when you had to manually navigate in the app. And while both Word and Excel are getting this feature, the latter also now supports multi-window mode.

The support for mouse, trackpad, and multi-window mode across the Microsoft 365 apps was announced last year but the company has been rolling them out in a graded manner. This means while some apps have got it already, some will get it a little later. The multi-window mode that has arrived in Excel has been available in Microsoft Word for some time now on the iPad. These new features take productivity on the iPad to the level where laptops currently have the privilege. The lines between different device categories are thinning by the day and it is not surprising Apple (and Microsoft) want the iPad to work more like laptops.

To be able to use the new interactivity feature, iPad users need to connect an external keyboard, including the Magic Keyboard, or a mouse to the device. The iPad will detect them automatically and so will Microsoft Word. The mouse and trackpad can be used to select the text, click, and drag and drop items to the document in the Word app. "Connect a trackpad or mouse to your iPad for another way to interact with Word. Use the trackpad from the all-new magic keyboard to interact with your document," Microsoft said in its release notes for Word on iPadOS.

Coming to Excel, the sheet-making software from Microsoft is getting multi-window support that will allow iPad users to open multiple documents at the same time in the app. Users can switch between these windows or interact with different spreadsheets by placing them side-by-side. Microsoft Excel has supported the multi-window mode on laptops and PCs for a while and with the arrival of this feature on the iPad, users can work in the same manner as they do on a laptop.

Although Microsoft has not updated PowerPoint yet with the multi-window or mouse interactivity features, it has not forgotten it. The PowerPoint app for iPad now has a new Presenter Coach that will give feedback to users and help them improve their presentations. The new update is available from the App Store on the iPad. Microsoft has not said when it will roll out the other two important (and major) updates to PowerPoint on the iPad.

You can go to the App Store on your iPad to download the new Word, Excel, and PowerPoint apps but remember you need to have a Microsoft 365 subscription to be able to use them. Also, the multi-window and mouse interaction features need your iPad to run iPadOS 13 or later. If you are using any previous versions -- which you should not be -- these new features will not be available to you.

Samsung Galaxy S21+ and Galaxy S21: All key specs and features you need to know