The Transcribe in Word feature will come in handy for students, researchers and reporters. It is only available for the web as of now. 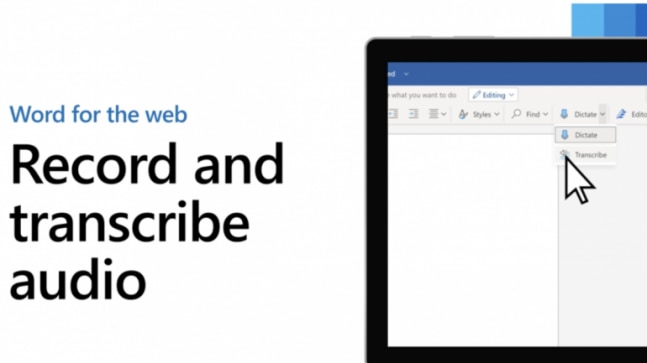 Microsoft Word for Web has introduced a Transcribe in Word feature that will let users transcribe an audio, that is convert speech into text format. The feature also has an option to edit the transcript.

Transcribe in Word feature is available for all Microsoft 365 users and requires them to be online to be able to use the feature. It is designed for the convenience of users that will save them both time and effort. The feature will come in handy for students, journalists, reporters and entrepreneurs.

Dan Parish, Microsoft principal group PM manager for Natural User Interface & Incubation, in a press briefing noted, "when you record a call live, the transcription actually runs in the background while you conduct your interview."

"Your transcript will appear alongside the Word document, along with the recording, which enables you to leverage your transcript to create great content in the way that is best for you," Microsoft said.

Transcribe also enables the users to upload audio or videos recorded outside of Word. "Whether you record on your phone or via one of the many calling and video conferencing apps, you can simply select the file to upload and transcribe. Transcribe supports .mp3, .wav, .m4a, or .mp4 files," the company informed.

To use Transcribe in Word users should: Go to the Menu or Home >Dictate dropdown > Transcribe.

Users can go back to their transcript files to edit and make corrections through time stamps. Microsoft uses individual speakers to transcribe texts. As marked by TechCrunch, Transcribe in Word lets users click on individual paragraphs in the transcript and then listen to that at a variety of speeds but does not let users click on individual words. Users have the options to save the full transcript as a Word document or insert snippets of it into existing documents.

As of now there is a 5-hour limit to the audios users can upload. Each uploaded recording is limited to 200MB. The Transcribe for Word feature is available to all Microsoft 365 users for free using the new Microsoft Edge or Chrome. The feature is only available to web users but it will soon be made available to Android and iOS users as well.

Realme C12 vs Redmi 9: How these two budget smartphones compare