After many leaks and speculations, the smartphone has been released with a MediaTek Help G25 SoC and a 48-megapixel camera. 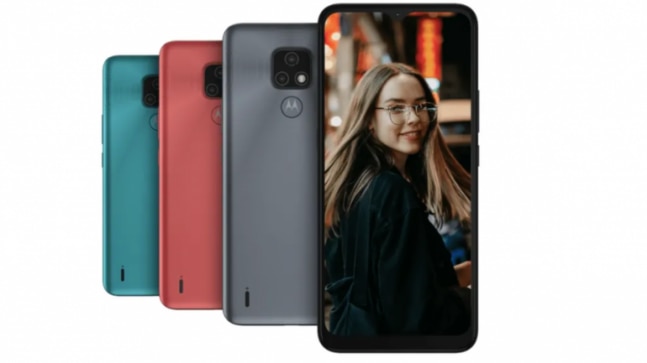 Motorola has made the Moto E7 official in Europe. After many leaks and speculations, the smartphone has been released with a MediaTek Help G25 SoC and a 48-megapixel camera. The Moto E7 is the watered-down version of the Moto E7 Plus which was released in India a couple of months ago.

As far as the design is concerned, the Moto E7 looks identical to the E7 Plus with a square-shaped camera module at the rear. On the front, there are thick bezels around the corner and a waterdrop notch. The rear panel also has a Motorola logo embossed on the center, which also doubles up as the fingerprint scanner.

So let us have a look at the key specifications, price and similarities with the E7 Plus

Moto E7 was launched in Europe for EUR 119.99 (approximately Rs 10,550). The phone will be available in Aqua Blue, Mineral Gray, and Satin Coral color options. The E7 will go on sale Latin America, the Middle East, and Asia. Motorola has not shared any official details about the India launch yet.

Moto E7 features a 6.5-inch HD+ display with a waterdrop notch. In terms of camera, it features a 48-megapixel primary camera and a 2-megapixel sensor on the rear. On the front, there is a 5-megapixel camera for selfies. The smartphone is expected to house a 4000mAh battery and run on Android 10 out of the box. The smartphone will be powered by a MediaTek Helio G25 SoC coupled with 2GB of RAM.

The Moto E7 comes in a lone 2GB RAM and 32GB storage variant. For connectivity, it will come with a 3.5mm headphone jack, Wi-Fi, LTE, GPS, and Bluetooth.