The Moto E7 Power is launching on Friday in India, and the smartphone is likely to go on sale soon after. 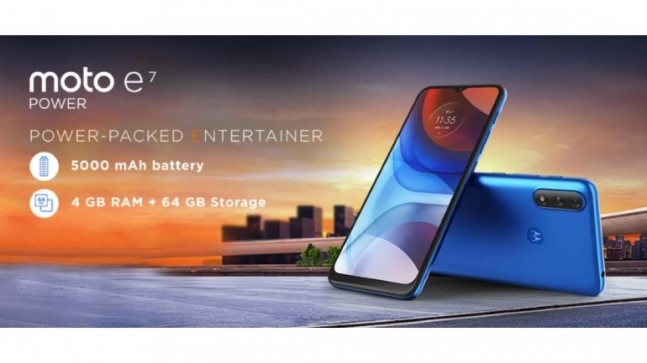 The Flipkart listing confirms a massive 5000mAh battery powering the device while the fingerprint sensor embedded in the iconic Moto logo at the back is visible as well. Other confirmed details include 4GB of RAM and 64GB storage and a 6.5-inch HD+ display.

According to previous leaks, the Moto E7 Power will come with the MediaTek Helio G25 SoC. For those unaware, it is an entry-level octa-core chipset clocked at 2.0Ghz and coupled with IMG PowerVR GE8320 GPU.

As already confirmed by Flipkart, the Moto E7 Power was rumoured to launching single variant featuring 4GB of LPDDR4X RAM and 64GB storage which is expandable up to 1TB via microSD. The Moto E7 Power is said to come with the dual-camera setup consisting of 13-megapixel primary and a 2-megapixel secondary sensor setup. On the front, the device is likely to get a 5-megapixel shooter for selfies.

The Flipkart listing does not reveal if the device will have support for fast charging. However, we can expect the detail to be revealed during the unveiling later this week.

Smartphones from Motorola always ship with a software that's close to stock Android with barely any bloatware installed. Hence, we expect the same from the upcoming mid-ranger. The Moto E7 Power is likely to ship with Android 10 out-of-the-box.

The device should support dual 4G VoLTE, GPS, Type C, 3.5mm jack, dual-band Wi-Fi, and more in terms of connectivity. At this price range, the Moto E7 Power is unlikely to get 5G support, and we do not doubt that.

The Moto E7 Power has been spotted in blue and red colour options. However, more options could be available at the time of the launch. Currently, there's no information around the pricing of the device but looking at the previous pricing trends, we can expect the device to be made available under Rs 10,000.