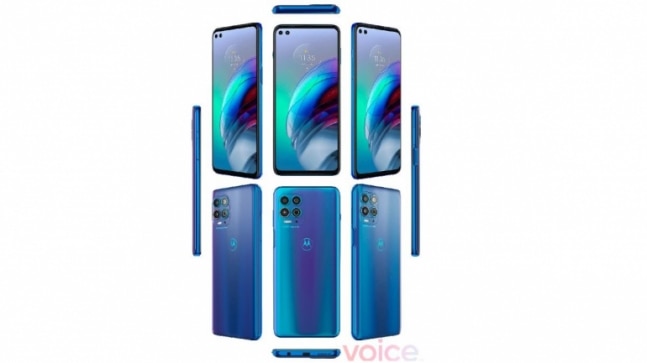 Motorola is anticipated to come out with its most powerful Moto G-series smartphone next month. However, leaks around the device have already started making their way to the Internet, and with one such tip, we might know all there is to the upcoming Motorola smartphone.

A new report by noted tipster Evan Blass gives us our first full look at the new Moto G-series device. Likely to be named Moto G100, the smartphone will come as the first Moto G-series offering to be powered by a Snapdragon 800 series processor.

Blass claims that the Snapdragon 870 SoC will power the Moto G100. In addition, the device will come with 256GB of internal storage coupled to 12GB of RAM, which might be dropped to 8GB in some regions. In either case, the internal storage will be expandable to a total of 1TB of storage capacity using an external microSD.

In a recent report, Blass also provides us with a complete look at the smartphone in a colour that is being called Iridescent Ocean. The all-blue device houses a 6.7-inch display with a Full HD+ resolution and slim bezels on all sides. While the top edge of the Moto G100 is barren, the lower end contains the USB Type-C port, 3.5 mm headphone jack and a speaker grille.

As for the camera setup on the device, Moto G100 will feature a total of six cameras. These will include a dual-lens setup at the front with a 16MP and an 8MP lens coupled together in a selfie punch format. At the back, the smartphone will don a quad-camera setup with 64MP, 16MP, and 2MP lenses along with a dedicated ToF sensor.

In his report, Blass mentions that the Moto G100 will be backed by a 5000mAh battery that will also support 20W fast charging. Interestingly, Motorola will bundle the smartphone with an HDMI cradle to allow a PC-like experience as and when the device is connected to a monitor and input peripherals.

Motorola had first introduced the Moto G100 under the codename 'nio' back in December last year. Following the appearance, the smartphone was showcased as Tahoe, and now with its launch anticipated soon, the Moto G100, with its tipped specifications, is sure to bump up Motorola's G-series with a powerful presence in the lineup.