Motorola had launched two new smartphones in the budget category- the Moto G30 and the Moto G10 Power, both priced around Rs 11,000. 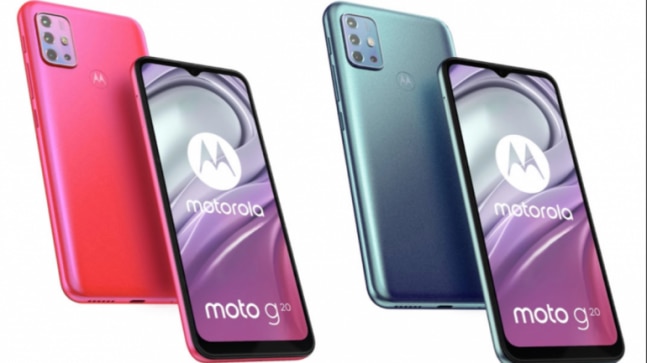 Motorola could launch another smartphone in the G series. The Lenovo-owned company can soon launch the Moto G20 in the market. The renders and specifications of the upcoming smartphone hint that it could be a budget offering. Motorola had launched two new smartphones in the budget category- the Moto G30 and the Moto G10 Power, both priced around Rs 11,000.

The leaked renders show a typical Motorola design with triple cameras and a display with thick bezels. Like most of its budget devices, the chin at the bottom is thicker than usual. As per tipster Sudhanshu, there will be a few minor upgrades as well as downgrades in the Moto G20. Sudhanshu shared the specifications as well as the renders of the upcoming smartphone with the 91Mobiles. Motorola is yet to make an official announcement about the same.

Moto G20 is expected feature a 6.5-inch IPS LCD HD+ display with a resolution of 720x1,200 pixels and an aspect ratio of 20:9. The display could come with a high refresh rate of 90hz. Although there is no information about the processor that would be used in the smartphone, the report states that the smartphone could come with an octa-core Unisoc T700 SoC coupled with 4GB RAM and 64GB storage.

The Moto G20 had appeared on US FCC listing which revealed that the smartphone could house a 5000mAh battery.

Apart from the G20, Motorola is gearing up to launch two smartphones in the mid-range category in India—the Moto G60, Moto G40. The G60 is highly anticipated because it is rumored to feature a 108-megapixel camera, and it is expected to be powered by Snapdragon 732 SoC. However, not much has been leaked about the other smartphone which is the G40 fusion, which could also the same processor as the G60.