The new Moto Razr not only comes with a better chipset, enhanced camera specifications but also comes with the latest 5G technology. 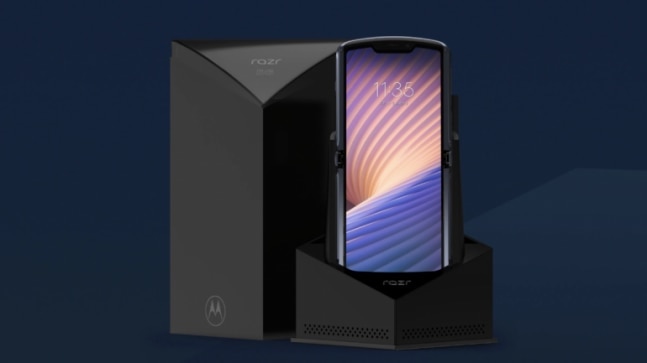 Motorola is back in India with its second Android foldable device, the Moto Razr 5G. It was one of the highly-anticipated launches of the year, considering Motorola had promised a lot of upgrades over the Moto Razr that was launched in 2019. The new Razr not only comes with a better chipset, enhanced camera specifications but also comes with the latest 5G technology.

Moto Razr 5G will lock horns with the newly launched Samsung Galaxy Fold 2 but we before we compare the two devices.Let us delve deeper into the specifications and other key features of the Moto Razr 5G.

Storage: The smartphone comes in a 256GB storage variant.

Front cameras: On the front, there is a 20-megapixel camera for selfies

Moto Razr 5G is an enhanced and a more powerful version of its predecessor, the Moto Razr. The company first launched its Android foldable smartphone in 2019 but returned with another foldable device in 2020 to woo its fans all over again. Not only has the Razr 5G got a better battery, it now has a powerful chipset to lead the show. Motorola has made tremendous changes to the design as well. You would now notice a more tapered chin, covered edges, and a glossy finish.

There have been major upgrades in terms of the camera as well. So the Moto Razr 5G comes with a 48MP shooter f/1.7 with optical image stabilization. There is this interesting thing about the rear camera that also doubles up as a selfie camera. How? You ask. So when the device is unfolded, the 48-megapixel shooter would do its job of being a rear camera but when you close the lid, it would turn into a 48-megapixel camera. Having said that, the Razr 5G also has a dedicated 20-megapixel camera that acts as a perfect selfie camera when the smartphone is unfolded

Now coming to the other most endearing feature— the QuickView display on the rear. The enhanced secondary display on the Moto Razr 5G lets access your favorite features more easily than ever. You can reply to a message, disconnect a call, access apps like Google Maps using the secondary display. It basically saves you from opening your phone again and again.

So if you are concerned about causing you Moto Razr harm by opening it repeatedly, then do note that the company's cycling test showed that the Razr is designed to withstand up to 200,000 flips. Motorola claims that it would take users over 5 years to reach that level of use.

The Moto Razr has been launched in India at a price of Rs 1,24,999 for the single 8GB variant. The HDFC credit and debit cardholders can get an instant discount of Rs 10,000 on the Moto Razr 5G. So after the discount, the smartphone can be bought at Rs 1,14,999.
Moto Razr 5G has been launched in Polished Graphite color in India. It will be available for purchase on Flipkart on October 12 at 12 pm and other leading retail stores.