Motorola's upcoming phone will also have a Google Assistant button on the side. 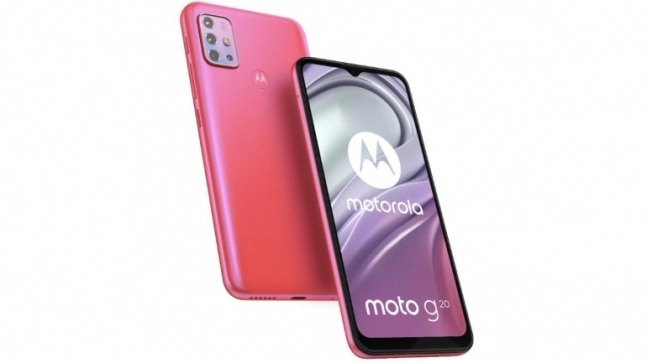 Motorola recently winded up launching the Moto G60 and Moto G40 Fusion smartphones. The Moto G60 is the company's first affordable 108-megapixel camera phone. But while the two phones come across as good ones for their price, Motorola is planning to launch another phone that will be for the masses. This phone may be the Moto G20. It has been a part of the rumour mill for quite some time, which is why we know a few things about it. Now, a fresh leak has tipped specifications and renders of the Motorola Moto G20.

Per a new piece of information shared by Nils Ahrensmeier from TechnikNews in a tweet, the Moto G20 will come with a 6.5-inch HD+ IPS display. This phone will likely be IP52 splash resistant, which means the phone will handle water spills. This display is expected to come with a waterdrop notch on the top, and inside this notch will be a 13-megapixel selfie camera. On the back, however, the Moto G20 will come with a 48-megapixel main camera. Supporting this camera will be an 8-megapixel ultrawide camera, a 2-megapixel macro camera, and a 2-megapixel depth sensor.

Performance-wise, the Motorola Moto G20 may use a Unisoc T700 chipset. And this processor may be paired with 4GB of RAM, along with 64GB of internal storage. Right now, it is not clear whether there will be more memory variants for this phone. Plus, we also do not know if the Moto G20 will have a microSD card slot to add more storage. At the back of the phone will likely be a fingerprint sensor for biometric authentication. Motorola's upcoming phone will also have a Google Assistant button on the side. The Moto G20 may come with a 5000mAh battery, however, there may not be support for fast charging. And yes, there may also be a 3.5mm headphone jack on the Moto G20.

Motorola Moto G20 may come in Sky Blue and Rosa Flamingo colours. According to a previous leak, the Moto G20 may cost EUR 148.07 in Spain. This price translates to roughly Rs 14,000. Right now, there is no official word on the launch, but Motorola is likely to bring the phone to markets soon. It is also not clear if the Moto G20 will arrive in India. However, if we look at the past record, Motorola may actually launch the Moto G20 smartphone in India.