Motorola is speculated to be working on a new Android foldable device that could be called the Motorola Razr 2020. 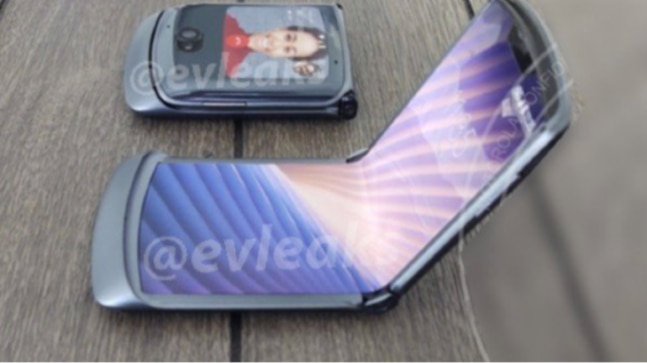 Motorola is speculated to be working on a new Android foldable device that could be called the Motorola Razr 2020. The company unveiled its first Android foldable device last year with a flexible OLED display which was priced at Rs 1,24,999 in India. However, despite an exorbitant price the smartphone had too many takers, which had pushed Motorola to come up with the next-generation model of the smartphone. At least that's what the new renders of the Motorola Razr 2020 reveal!

Noted tipster Evan Blass has leaked the renders of Motorola Razr 2020 online. The tipster claims that the upcoming premium device by Motorola is known by the codename "Odyssey" but it could actually be the next-generation model of the Motorola Razr. The upcoming smartphone is tipped to come with Qualcomm Snapdragon 765G SoC, which has support for 5G.

In the are renders, the Motorola Razr can be seen in a silver mercury color. The smartphone features a clamshell design similar to its predecessor and a secondary screen on the rear of the device. The first generation Moto Razr, despite the hype and exorbitant price, had inferior specifications as compared to Samsung's foldable device at a similar price point. This was one of the reasons why the smartphone geeks were not too excited about the Moto Razr. However a lot of improvements are in the offing, Motorola is eyeing to offer enhanced specs with the second generation model.

As per previous leaks, the Motorola Razr 2020 is speculated to feature a 6.2-inch Flex View P-OLED flexible screen. The smartphone is also tipped to feature a secondary 2.7-inch Quick View G-OLED display, this can also be spotted in the latest renders. In terms of camera, Motorola is all geared up to offer improved camera specs as compared to its previous model. The smartphone is tipped to come with a 48-megapixel primary camera and a 20-megapixel camera for selfies. The first generation Moto Razr featured a 16-megapixel primary camera at the rear and a 5-megapixel camera for selfies

The Moto Razr 2020 is speculated to arrive with Snapdragon 765 Soc paired with 8GB RAM and 256GB of storage, which is a massive upgrade over the first-gen model as it came with a Snapdragon 710 chipset paired to 6GB RAM and 128GB storage. In terms of battery, the second generation Moto Razr is expected to house a 2845mAh battery with support for 18W fast charging, which is also a minor upgrade over the Moto Razr 5G's 2510mAh battery with support for 15W fast charging. The phone is expected to arrive somewhere in 2021.