Motorola also shared the Flipkart listing of the upcoming device which revealed that smartphones would be launched in India on August 24. 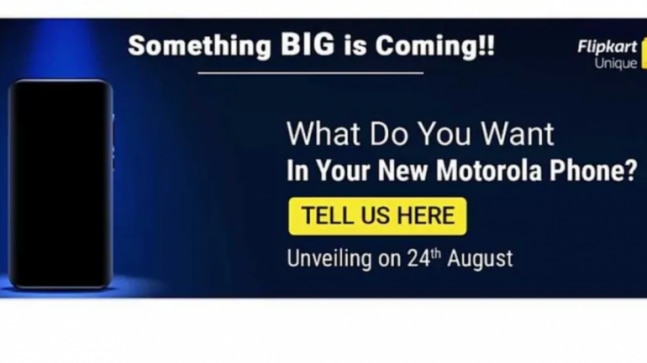 Motorola could soon be releasing a new smartphone in the Indian market. The company took to Twitter to share that it is launching a new phone in the country but did not reveal the name of the device. Motorola also shared the Flipkart listing of the upcoming device which revealed that smartphones would be launched in India on August 24. Although not much was revealed about the phone in the teaser, it is being speculated that Motorola could drop the E7 plus in India.

Sharing the teaser of its upcoming phone on Twitter, Motorola tweeted from its official handle, "Gear up for a spectacular performance and stunning camera! Launching soon on Flipkart." In the teaser, it can be seen that the device would feature a rear fingerprint sensor with the Motorola emblazoned on it. You can also spot the volume and power buttons mounted on the sides and the speaker grille at the bottom. The USB-Type C charging port can also be spotted in the video teaser.

Although not much about the specs of the device could be derived from the fleeting teaser, Motorola's next smartphone could focus primarily on the camera and might come with a powerful chipset as claimed by the company. The teaser on Flipkart also hints at the screen size of the upcoming device. It says, "Something Big is coming". This indicates that Motorola would launch its device with a large display, a powerful chipset—presumably a Qualcomm Snapdragon one and multiple camera sensors at the rear for pictures.

Just before the launch was teased on Flipkart, a few of Motorola's rumored devices got listed on foreign websites. One of the devices that are making a lot of news is the Moto E7 Plus. Noted tipster Evan Blass tweeted specifications of the device recently. He had tweeted a picture that features the specifications of the Moto e7 Plus. The picture reveals that the Moto E7 Plus would feature a 5000mAh battery and an Octa-core processor with 4GB of RAM and 64GB of storage.

The Moto E7 Plus could come with a dual-rear camera with an LED flash and the company logo is also emblazoned at the rear panel of the device. Although the reports of Moto E7 Plus housing a Snapdragon 460 chipset had surfaced earlier as well, some reports had even claimed that the device could be a rebranded G9 Play.