Motorola's next two phones may be important for the market as one will have the 108-megapixel camera as the headline feature. 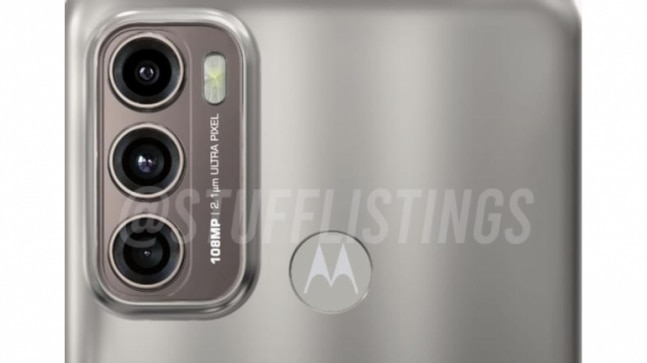 You may soon see two new Motorola smartphones in India. The company recently launched the Moto G10 and Moto G30 in India for customers who want big batteries and modest specifications on phones that do not burn a hole in the pocket. But now, Motorola seems to be getting ready for some high-level action. There are two phones that Motorola may be working on, and one of them is most likely to get a 108-megapixel camera. And if that holds any water, Motorola's upcoming Moto G60 may be the third affordable handset with that high-grade camera.

A tip by Mukul Sharma has said that the headline feature of one of the upcoming Moto G-series phones will be the 108-megapixel camera. While Sharma does not mention which phone this will be, a recent image render hints this phone could be the Moto G60. In the render, the phone has "108MP" etched on the camera module. And that is why there may be a possibility Motorola's 108-megapixel camera phone will be the Moto G60. Again, if this rumour turns out true, the Moto G60 will be Motorola's answer to the Realme 8 Pro and Redmi Note 10 Pro Max.

Both the Realme 8 Pro and Redmi Note 10 Pro Max are the latest additions to the sub-Rs 20,000 segment with the mighty 108-megapixel cameras. We have tested both phones out and found that this camera is actually a lot more impressive than we initially thought. While this camera is what is the identity of the Realme 8 Pro, the Redmi Note 10 Pro Max is a solid deal for its price. And that is why Motorola will have to be very careful with its 108-megapixel camera pitch for the upcoming phone. It has one thing in its favour -- stock Android -- that it may use as a salvo, too. Sharma has further noted that this phone -- Moto G60 -- may come with a 32-megapixel front camera. The selfie camera setup is not clear, but the render shows it will be inside the centrally-located punch-hole. The Moto G60 may have a total of three cameras on the back, but their details are not clear at this point. The camera design is also very similar to what we have seen on Samsung Galaxy A52 or Oppo Reno 5 Pro 5G.

A previous report suggested the Motorola Moto G60 will have a 6.78-inch Full-HD+ display with a 120Hz refresh rate, a Qualcomm Snapdragon 732G processor, 6GB of RAM, 128GB of internal memory, and, finally, a 6000mAh battery inside. All of this is over and above the 108-megapixel triple-camera setup that we talked about earlier. The 108-megapixel camera will use the same Samsung ISOCELL HM2 sensor that the other two 108-megapixel phones have. The rumoured specifications of the Moto G60 paint a positive picture for the handset as it looks to take on the Realme 8 Pro and the Redmi Note 10 Pro Max.

For now, there is no information on when the Moto G60 and the second G-series phone (which could be Moto G40 Fusion) are coming to India. We are likely to get more information in the coming days.