Apple has introduced the latest generation of iMac in an event, which will be available for purchase starting the second half of May. 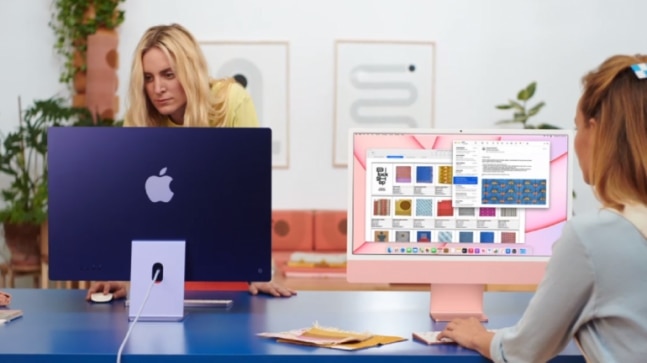 Apple has launched the new generation of iMac during its Spring loaded event that now comes with the company's own M1 chipset. In an interesting twist, Apple will now also offer the iMac in several new colour options that will match with that of its accessories.

Apple says that the implementation of the new M1 chip has allowed it to reduce the size for components inside the iMac. Due to this, the iMac is now at its slimmest ever, measuring only 11.5 mm thick and weighing around 4.5 kg.

Another first on the new iMac will be the debut of Touch ID on the Magic Keyboard, which will now allow users to login to any account with an on-keyboard fingerprint sensor. Other than this, here is what the new iMac has on offer.

The new line of iMac will feature a 23.5-inch 4.5K Retina display that comes with 11.3 million pixels, 500 nits of maximum brightness and P3 1B color support. In addition, the display will feature Apple's True Tone technology that adjusts colour temperature automatically as per the surroundings as well as an "industry-leading" anti-reflective coating.

For performance, the new iMac will make use of Apple's ARM-based M1 chipset with eight CPU cores. Coupled to this will be up to 8 GPU cores that promise up to 50 per cent better GPU performance than the predecessors. The device will also boast of 3x faster machine learning than the previous generation iMac.

As for storage, two of the variants will offer 256GB of internal storage while the most advanced model will come with 512GB internal storage. All of these will make use of 8GB unified memory for performance.

All three of the models will come with two Thunderbolt ports with USB type-4 support. Two of the premium models will additionally feature two USB type-3 ports and support for Gigabit Ethernet.

For video calls, Apple has embedded a 1080p webcam on the new iMac, along with six built-in speakers and a three-mic array. Apple says that the mics come with directional beamforming and are specially positioned to reduce noise from the surroundings as well as the system itself.

Apple says that the new iMac series will be up for pre-bookings starting April 30 and will be available in Apple Stores in the latter half of May.

The iMac will be available in green, yellow, orange, pink, purple, blue and silver colour options.

The base variant of the iMac will retail for Rs 1,19,900. It will be available with 7-core GPU, without the two USB type-3 ports and support for Gigabit Ethernet and in only four colour options.

As for the other two with 8-core GPU, the mid-variant will come with 256GB storage and will be priced at Rs 1,39,900, while the premium model will feature 512GB storage in all seven colour options and will retail for Rs 1,59,900.