While the economics of 3D printing still wouldn't support its usage in many industries, particularly where high volumes are involved, it is finding enough use cases in sectors such as aerospace, where volumes required are low. Recently, Wipro Infrastructure Engineering said it had manufactured India's first additively manufactured functional metal component. 3D printing is coming of age in India - manufacturers are slowly transitioning from prototypes to printing of actual components. While the economics of 3D printing still wouldn't support its usage in many industries, particularly where high volumes are involved, it is finding enough use cases in sectors such as aerospace, where volumes required are low.

Here's all you need to know about the country's first 3D printed functional component.

1. The 3D printed component is flying on ISRO's GSAT-19 satellite, a communication satellite. Called the 'Feed Cluster', the aluminium component was a collaborative effort. While the design was ISRO's, the additive engineering was executed by Wipro 3D. Established in 2012 within Wipro Infrastructure Engineering, the firm provides additive manufacturing services. The component was manufactured on an EOS printer. 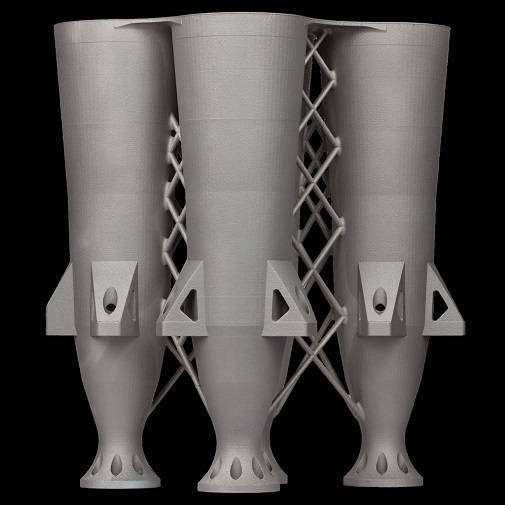 The 3D-printed 'Feed Cluster' will be flying on ISRO's GST-19 satellite.

2. The component is fairly large in dimension. It is part of the satellite's communication system and is 320 mm in height with a wall thickness of 2mm.

3. The value to ISRO: There are four elements to the 'Feed Cluster'. In the traditional method of manufacturing, they would need to be manufactured separately, aligned, and assembled. That could result in alignment errors. 3D printing implies reduced assembly parts leading to reduced radio frequency leakage. The more joints, more is the inefficiency. Also, the additive process reduces the weight of the component, important from a space point of view.

4. The time taken to print the component: The design iteration spanned a few weeks. However, from the beginning of the production to delivery, it takes a week.

5. Wipro 3D says its rapidly moving from prototyping to functional components in other industries as well - missile components and engine parts are being tested, for instance.  The company currently services aerospace, industrial, heavy engineering, automotive, and nuclear sector customers with additive manufacturing services. The ISRO deal is expected to open up newer avenues for the company globally, coinciding the space agency's reputation for pioneering work.