The company cancels the sale at its flagship Beijing unit, though Apple stores in other parts of China open as usual. The iPhone 4S will still be sold through Apple's online store, its local carrier China Unicom and authorised resellers.

Apple iPhone 4S launch in China on Friday was marred by angry customers and gangs of scalpers throwing eggs at the company's flagship Beijing store, after its opening was cancelled due to concerns over the size of the crowd.

Apple reacted to the scuffle by postponing iPhone 4S sales in its mainland China stores to protect the safety of customers and employees. It said the phone still will be sold online and through its local carrier.

Customers, including migrant workers hired by scalpers in teams of 20 to 30 to buy iPhones for resale at a markup to Chinese gadget fans, waited overnight in freezing weather at the Apple store in Beijing's east side Sanlitun district.

The crowd erupted after the store failed to open on schedule at 7 am. Some threw eggs and shouted at employees through the windows.


A person with a megaphone announced the sale was cancelled. Police ordered the crowd to leave and sealed off the area with yellow tape. Employees posted a sign saying the iPhone 4S was out of stock.

"We were unable to open our store at Sanlitun due to the large crowd, and to ensure the safety of our customers and employees, iPhone will not be available in our retail stores in Beijing and Shanghai for the time being," said Apple spokeswoman Carolyn Wu. Chinese people wait outside the Bejing Apple store for the iPhone 4S model.
Other Apple stores in China opened on Friday and Wu said iPhone 4S quickly sold out. She said the phone still will be sold in China through Apple's online store, its local carrier China Unicom Ltd. and retailers that are authorized resellers.

China is Apple's fastest-growing market and "an area of enormous opportunity," CEO Tim Cook said in October. He said quarterly sales were up nearly four times over a year earlier and accounted for one-sixth of Apple's global sales.

MUST SEE:Android phones in your budget


Apple's iPhones are hugely popular in China and stores are mobbed for the release of new products.

iPhones are manufactured in China by an Apple contractor but new models are released in other countries first. That has helped to fuel a thriving "grey market" in China for phones smuggled in from Hong Kong and other markets. 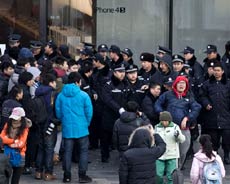 An angry crowd shouted and threw eggs at Apple's Beijing flagship store after it failed to open on schedule on Friday to sell the popular smartphones.
Last May, the Sanlitun store was closed for several hours after a scuffle between an employee and a customer during the release of the iPhone 4, the previous model in the series.

Customers began gathering Thursday afternoon outside the Sanlitun store. People in the crowd said the number grew to as many as 2,000 overnight but many left before dawn after word spread that the store opening would be cancelled. There were about 350 people left when the protest erupted after 7 am.

"On the one hand there is poor organization and on the other there were just too many people," said a man outside the Sanlitun store Friday, who would give only his surname, Miao. "I don't think they prepared well enough."

Another man who refused to give his name said he was a migrant laborer who was paid 100 yuan ($15) to wait in line overnight.

Others in the crowd said scalpers had organized groups of 20 to 30 migrant workers to buy phones or hold places in line. Organisers held colored balloons aloft to identify themselves to their workers.

Others said they were waiting to buy the phone for themselves.

"I just like the 4S," said Zhu Xiaodong, a Beijing resident. He said he was upgrading from the previous iPhone 4 model.