Awesomeness has a new name: iPhone 6 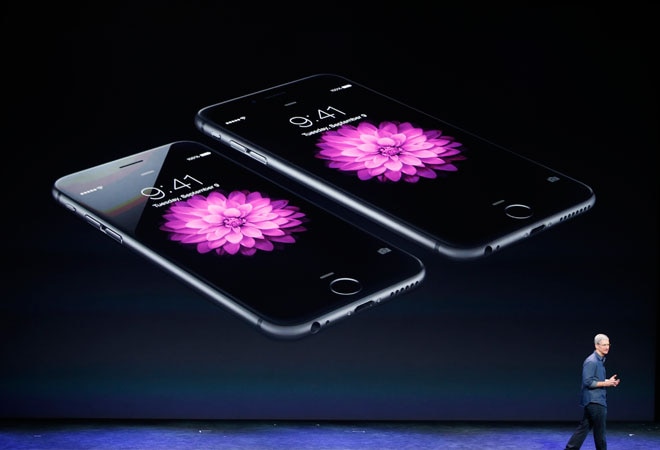 Apple CEO Tim Cook speaks during the company event announcing the iPhone 6 and the iPhone 6 Plus in Cupertino, California, on September 9, 2014. Photo: Reuters

A 4.7-inch screen with 1334 X 750 pixel resolution display, encased in an all-aluminium 6.8-mm slim chassis with a powerful A8 64bit chipset of brain. With ion-strengthened glass front, the curvature design aesthetic follows to the aluminium back that sports a stainless steel Apple. This is the iPhone 6 for you.

The bigger sibling encases a 5.5-inch display and marks Apple's entry into the phablet space. The display has got a 1980 x 1080 pixel resolution in a 7.1-mm thick chassis. The back is made of anodized aluminium and has got the stainless steel frame too.

The awesomeness of dimensions is extended to the innards as well.

While the megapixel count remains the same, both the iPhones have a new iSight sensor. Both the cameras support faster auto focus. The iPhone 6 features digital image stabilisation while the iPhone 6 Plus has got optical image stabilisation. Apple also says it's now capable of capturing 1080p video at 30 or 60 frames-per-second, and Slo-Mo video at 240 frames-per-second. Panoramas have been increased to up to 43 megapixels.

In addition, the iPhones have got NFC chips for Apple Pay. This is the new payment service where payments can be made with the phone instead of the credit card at checkout counters. This makes the two iPhones unique. Of course, this service will first be available only in the US with no security threats as the credit card numbers are stored in the Passbook app. Neither Apple nor the retailer will have access to that information.

Irrespective of the bigger display, Apple has still made both the phones user-friendly by introducing a new gesture called "Reachability", to account for the increased screen size of the iPhone 6 and iPhone 6 Plus.

Double touching the home button will slide down the entire display, making the top software buttons accessible in whatever app you're in. The 5.5-inch iPhone 6 Plus also allow apps to show more information.

For instance, in landscape mode, the Mail app will show both a list view of messages on the left side and the content of the selected message to the right, similar to how it is displayed on Apple's iPad Air and iPad Mini.