Why Apple iPhone 6 cannot be compared to Google Nexus 4

The iPhone 6 has faster LTE connectivity and supports higher download speeds. Even for WiFi, it works three times faster than the predecessor and most other smartphones. iPhone 6 Plus (in front) and iPhone 6. Photo: Reuters

What is it with an Apple announcement and a full moon that brings out the crazies in the people? I am sure by now most of you must have seen the Apple iPhone 6 comparison with the Google Nexus 4 on the Internet. 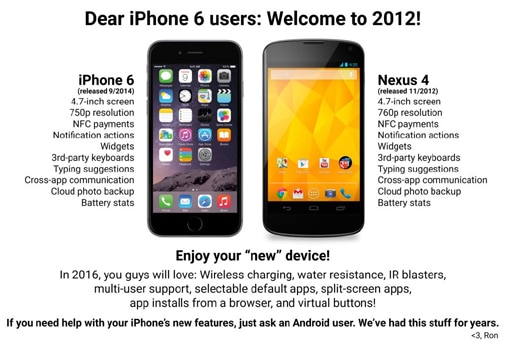 The new A8 chipset with the second-generation 64-bit architecture is zipping fast. Be it graphic games or any other heavy app, the chances of slowing down the phone is next to nil. Apple claims that the phone won't heat up even at high performance. The Nexus 4, when launched in 2012, had a 1.5GHz quad core processor based on Qualcomm Snapdragon 8064 chipset. Even today's Android smartphones with the latest chipsets heat up. And don't ask about lags and freezing, which is often.

The Nexus 4 had an 8MP camera and so does the iPhone 6. But the imaging quality and sensor on the iPhone 6 are far superior than most cameras in smartphones today. The new Focus Pixel technology provides the sensor with more information about the image, giving a better and faster autofocus that one can see in preview.

The iPhone 6 has faster LTE connectivity and supports higher download speeds. LTE is short for Long-Term Evolution, commonly known as fourth-generation or 4G technology. Apple claims it supports more LTE bands than any other smartphone. Even for WiFi, it will work three times faster than the predecessor and most other smartphones.

Do you actually care about these apps? Apple is particular about the apps listed on the iPhone. On Android devices, half the apps are useless or collect private information and can pose threat to your phone.

Since the first iPhone launch, all the iPhones had a premium feel. But holding the Nexus 4 wasn't any match. And most Android smartphones look alike. The recent Panasonic Eluga U has a similar back as the Nexus 4.

The online posts also boast the Nexus 4's wireless charging capabilities. But, typically, a Qi wireless charger doesn't accompany the handset and it needs to be purchased separately. Of the number of people who purchased the Nexus 4 back then, I don't really know anyone who invested in one.

That's one thing Apple has and Nexus doesn't. And this isn't only for show-off as, until now, it was used to unlock phones or authorise purchases on the App Store. Now with the Apple Pay service, it will be used for authenticating payments too.

The biggest advantage of owning an Apple device is the service. The whole network is so systematically planned that in case you have any issue with your device, just walk into any service centre. If the problem is beyond repair, in most cases the unit is swapped. It might be a refurbished unit, but you still get the warranty from the date of the purchase. Also, you are saved from the hassle of calling and visiting the customer care like in the case of most other brands. In India, with Nexus 4, people had a tough time to get the handset repaired.

You might call me an Apple fan but these are some genuine differences between using an iPhone and the Nexus 4. There are not many iPhone users I know who switch to Android. However, there are many Android users falling for Apple.

'Steve Jobs would be smiling for Apple's achievement'