iPhone 12 mini: When it comes to calculating local pricing before the launch, other than country-specific duties and taxes, companies like Apple have to keep a buffer for currency fluctuations as well Apple iPhone 12 mini: Why is phone more expensive in India?

Why is Apple selling iPhone 12 mini for around Rs 70,000 in India when it is available for $699 in the USA? This straight-up translates $1 to Rs 100. The social media platforms are swamped with outrage posts, but what most fail to recognise is the duties, taxes and other costs that are included in the India pricing, aside from the aggressive marketing offers that Apple pushes with its products.

The $699 pricing in the US is not inclusive of the state taxes, which vary from state to state in the US.  For instance, 7 per cent tax is added in Florida, whereas a little over 8 per cent in New York. By contrast, 18 per cent GST is standard across India, which is included in the maximum retail price. Of the Rs 69,900 iPhone 12 Mini, the GST alone amounts to Rs 10,662.71. This has been added over and above the cost of the iPhone, which also includes custom duties including cess. Although Apple has been expanding its assembly line in India, sources at Apple confirmed that the iPhone 12 series will be imported, which draws 22 per cent duties. It will amount to approximately Rs 10,682.13 before levying GST. In all, for Rs 69,900 iPhone 12 mini, consumers are paying approximately Rs 21,344 in taxes and duties.

Here is a chart for your reference: 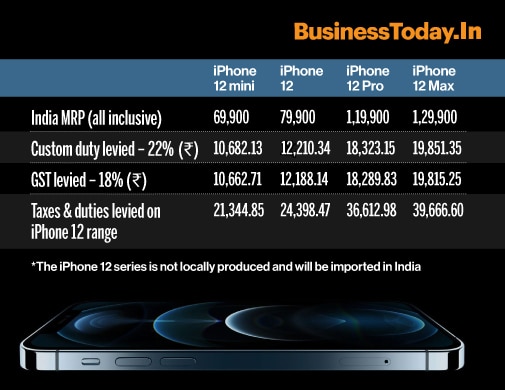 "There are multiple factors and the biggest one is assembling in India, which Apple is likely to ramp up in coming times. Other factors including forex, GST and supply chain which also play an important part in pricing," says Tarun Pathak, Associate Director, Counterpoint Research.

When it comes to calculating local pricing before the launch, other than country-specific duties and taxes, companies like Apple have to keep a buffer for currency fluctuations as well. Even though $1 costs Rs 73.4, the lowest level in 90 days has been Rs 75.25.

Partnering with banking institutes to offer aggressive affordability offers like cashback and zero EMIs brings down the upfront cost of the iPhone. With the same becoming an industry norm, Apple has to keep a buffer for similar offers too.  While offering better pricing, it also ensures there is no upfront price drop. Currently, Apple is offering 6 per cent cashback with qualifying cards.

"Apple really cannot play a game of pricing versus competition In India. Since the India market is low on value versus any other. So, a premium positioning will always be maintained," says Navkendar Singh, Technology Industry Analyst at IDC.

As the above factors contribute to the India pricing of the iPhone, users can bring down the cost by availing cashback offers. Those with GSTIN number can even claim GST input credit. While cashbacks will be standard across Apple online store, e-commerce portals and offline stores, consumers might find it easier to claim GST on Flipkart over Amazon.

PUBG ban in India: Why gamers can still download, play the game