Google to sell Motorola business to Lenovo for $2.9 billion

The deal announced will rid Google of a financial headache that has plagued the Internet company since buying Motorola Mobility for $12.4 billion in 2012. 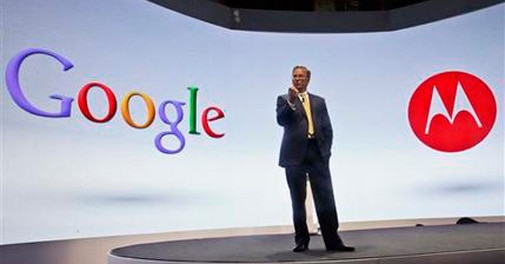 Google is selling Motorola's smartphone business to Lenovo for $2.9 billion, a price that leaves little doubt that Google's biggest acquisition turned out to be an expensive mistake.

The deal announced on Wednesday will rid Google Inc. of a financial headache that has plagued the Internet company since buying Motorola Mobility for $12.4 billion in 2012. Motorola has lost nearly $2 billion since Google took over, even as Motorola trimmed its workforce from 20,000 to 3,800.

Google previously recovered some of the money that it spent on Motorola by selling its set-top operations last year to Arris Group Inc. for $2.35 billion.

And Google is holding on to most of Motorola's more than 20,000 mobile patents, providing Google with legal protection for its widely used Android software for smartphones and tablet computers. Gaining control of Motorola's patents was the main reason Google was willing to pay so much for a smartphone maker that was already losing money and market share.

The Motorola patents were valued at $5.5 billion at the time Google took over, according to regulatory filings.

It's also unclear if Google will have to absorb a charge to account for its apparent miscalculation of Motorola Mobility's value. The Mountain View, Calif., company may address the issue Thursday when it announces its fourth-quarter earnings after the market closes.

Most investors viewed Motorola as an unnecessary drain on Google's profit, a perspective that was reflected by Wall Street's reaction to the sale. Google's stock gained $28.08, or 2.5 percent, to $1,135 in extended trading.

A cellphone pioneer, Motorola Mobility had its last big hit with the Razr flip phone, which came out in 2004. Its product line became outmoded after Apple Inc. released the iPhone in 2007, unleashing a new era of touch-screen phones. Motorola hasn't been able to catch up yet, even as last summer's Moto X received positive reviews.

Motorola's losses are likely to dampen Google's earnings at least for the first half of this year. That's because it's expected to take six to nine months before the proposed sale gets the necessary approvals from regulators.

While Google is backpedaling, Lenovo Group Ltd. is gearing up for a major expansion. Already the world's largest maker of personal computers, Lenovo is now determined to become a bigger player in smartphones as more people rely on them instead of laptop and desktop computers to go online.

Lenovo already is among the smartphone leaders in its home country of China, but it has been looking for ways to expand its presence in other markets, especially the U.S. and Latin America. The company had been rumored to be among the prospective buyers for BlackBerry Ltd. when that troubled smartphone maker was mulling a sale last year.

"We will be going from an emerging-market player to a worldwide player in smartphones," Lenovo CEO Yang Yuanqing said in an interview with The Associated Press.

Buying Motorola will enable Lenovo to join Apple Inc. as the only major technology companies with global product lines in PCs, smartphones and tablets, putting Lenovo in a better position to become a one-stop shop for companies to buy all their devices from the same vendor, said Forrester Research analyst Frank Gillett.

"This makes Lenovo a company to watch," Gillett said in an email. "The personal device manufacturer business is consolidating - and manufacturers must compete in all three device markets, plus emerging wearable categories, or get left out of the next market shift."

Yang believes Lenovo's experience in PCs will prove helpful as the company tries to take advantage of the Motorola brand, which remains among the best-known in the mobile-device market despite the company's recent struggles. Lenovo gradually grew into the world's leading PC maker after buying the ThinkPad brand from IBM in 2005.

After it takes over, Lenovo plans to retain a Motorola management team led by Dennis Woodside. No layoffs of Motorola's remaining workers are planned either, Yang said.

"We didn't buy this to get a few million devices," he said. "The people are very important to us. This is our treasure."

Motorola is preparing to move its headquarters from Libertyville, Ill., to Chicago, where Lenovo intends to keep the subsidiary, Yang said.

Google had reassigned Woodside, one of its top executives, to run Motorola Mobility in hopes he could engineer a turnaround. Under Woodside, Motorola released the Moto X and another smartphone, Moto G. The phones attracted lots of headlines, but didn't sell as well as anticipated despite a costly marketing campaign, analysts say.

Motorola reduced the price of the Moto X by 20 percent to $399 this year in an effort to sell more of the phones.

Most analysts thought Google had paid too much money for Motorola and questioned why Google wanted to own a smartphone maker at the risk of alienating other mobile device makers that rely on Android. Although Google doesn't charge device makers to use the software, Google makes money from Android because the operating system features Google services that show digital ads.

Getting rid of Motorola "still doesn't preclude Google from going out and continuing to pursue a device strategy that is new and innovative and attractive," Nomura analyst Anthony DiClemente said.

In a blog post, CEO Larry Page reaffirmed Google's commitment to making wearable computers such as its Internet-connected head gear, Glass, and equipment for home entertainment, such as its Chromecast device for streaming Internet video on televisions.

"The smartphone market is super competitive, and to thrive it helps to be all-in when it comes to making mobile devices," Page wrote. "It's why we believe that Motorola will be better served by Lenovo."