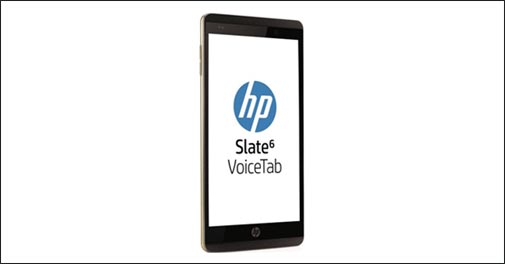 Tech firm Hewlett-Packard (HP) on Thursday launched two voice-calling tablets and appointed actor Deepika Padukone as brand ambassador in a fresh bid to strengthen its position in the Indian market.

"India is a unique market. There is a huge population of young people who are demanding and aware of the latest technology. They want fast performance, long battery life and multi-tasking, all of which are addressed by these new devices," HP India VP and GM (Printing and Personal Systems) Rajiv Srivastava told PTI.

The tablets are being launched only in India at the moment, he added.

According to research firm CMR, about 12.04 lakh tablets were sold in the July-September 2013 quarter, a growth of nine per cent year-on-year.

India is a big market for handheld smart devices.

According to Gartner, smartphone sales in India grew 166.8 per cent in the fourth quarter of 2013, the highest growth among the countries it tracks.

Worldwide smartphone sales grew 36 per cent to 282 million units in the October-December quarter of 2013, accounting for 57.6 per cent of the overall phone sales.

The company has also roped in Bollywood actor Deepika Padukone as its first brand ambassador in the country.

"Our new line up represents the focus that we have on the Indian market. The requirements and aspirations of the young Indians is changing and our future lineup will also reflect that," he said.