Former Google CEO Eric Schmidt said he witnessed the creative potential of Indians all around him in Silicon Valley, where India-born entrepreneurs account for 40 per cent of start-ups. 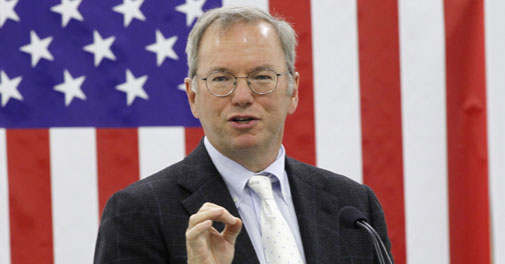 India's entrepreneurial innovators have the potential to build the "next Google" if the country "plays its cards right" and ensures Internet access for millions of its citizens, Google 's executive chairman Eric Schmidt has said.

In an essay written for the book 'Reimagining India: Unlocking The Potential of Asia's Next Superpower' edited by global consulting firm McKinsey, Schmidt dubbed India "an Internet laggard" saying he feels Internet in the country today is like where it was in America in about 1994 - four years before Google was even born.

He said India must increase its Internet penetration across towns and cities, a move that will have a positive impact on its economy and society.

The former Google CEO said he witnessed the creative potential of India's people all around him in Silicon Valley where India-born entrepreneurs account for 40 per cent of start-ups.

"Just think what will happen when India's entrepreneurial innovators are able to create great global companies without leaving their country. They will change the world. Hundreds of large firms focused on the Internet will be founded and will succeed by focusing purely on Indian consumers, Indian taste, Indian style and Indian sports.

"Can anyone of those companies ultimately become the next Google, Of course."

"That may not happen for quite a few years. But if India plays its cards right, we will soon see Indian engineers and small businesses tackling Indian problems first, then exporting the solutions that work best," Schmidt said.

With a total population of 1.2 billion, India has over 600 million mobile-phone users but only about 150 million people regularly connect to the Internet.

"By any reasonable definition, India is an Internet laggard... In spite of its well deserved reputation as one of the world's leading IT and software development hubs, India is far from being the connected society many foreigners imagine," Schmidt said.

The number of India's broadband users, 20 million, is even smaller, Schmidt said however adding that India is on the cusp of a connectivity revolution.

"I believe India has the chance to leapfrog its current connectivity challenges, bring Internet access to a majority of its citizens - and even raise its penetration ratio to 60 or 70 per cent within the next 5-10 years," he said.

He said if India connects its next 500 million people with Internet, it would make the country the largest open-access Internet market in the world.

"In 10 years' time I predict it will be almost impossible for any child in India to imagine what life was like before the Internet. But to realise that promise India must make the right technology choices," Schmidt said.

Schmidt stressed that one key choice India should make is how quickly it builds out the fixed-line networks in its cities and towns adding that fiber-optic cables are by far the best way to promote higher connectivity.

India should also get its cellular technology right, making the transition from 2G and 3G to 4G technology as quickly as possible.

Fourth-generation technology makes "far more efficient use of the spectrum and users can get so much more bandwidth out of it".

Schmidt said it may take time for India to achieve these two goals because its telecommunications industry is undercapitalised and has a lot of debt.

"But I am confident that eventually the transformation will happen," he said.

The Google head said investing in a bigger, faster telecom network will have a big payoff for India as that network combines with one of the most "radically life-altering developments" of the last decade - the emergence of moderately-priced mobile devices.

"In India this phenomenon is sure to unleash a customer-driven revolution on a scale we have never seen before in education, financial services, healthcare and entertainment," he added.

Jury set to decide how much Samsung owes Apple

Eric Schmidt asks India to embrace transparency in Internet use