Microsoft Corp's new CEO Satya Nadella made a polished debut on Thursday that set him apart from his energetic predecessor, signaling his plans to make mobile apps the top priority at the world's largest software company. 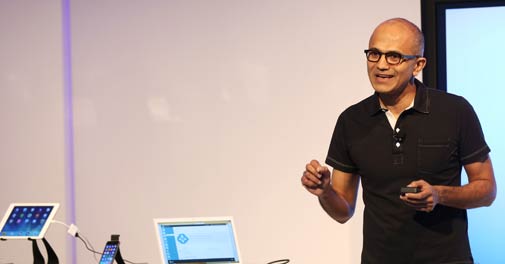 Microsoft Corp's new CEO Satya Nadella finally unveiled Office for Apple Inc's iPad in a polished debut that set him apart from his energetic predecessor while signaling his plans to make mobile apps the top priority at the world's largest software company.

At a news conference Thursday, executives demonstrated a new "touch-first" version of Office crafted for the iPad, available for download as a free app, though a subscription is needed to let users create or edit documents rather than just read them.

Significantly, they did not demonstrate any software on Windows machines, telegraphing a departure from former Chief Executive Steve Ballmer's focus on the personal computer operating software and its own devices.

"Their absence speaks volumes," said Daniel Ives, an analyst at FBR Capital Markets. "Nadella's a cloud-centric guy; he's going to focus on what's been successful, and where the future's going. Windows 8 thus far has been extremely underwhelming."

Nadella kicked off the presentation with a fluid, low-key introduction to Microsoft's approach to the new mobile, cloud-centric world of computing, in his first public appearance since taking the helm 52 days ago.

Dressed in a black polo shirt and dark jeans, the 46-year-old computer scientist threw in some geek humor and lines of poetry from TS Eliot, marking a change in style from his energetic predecessor Steve Ballmer. His lack of references to Windows indicated a deeper strategic shift.

Nadella gave no indication of when Microsoft would release "touch-first" versions of Office apps for Windows 8, the latest version of the operating software, which he acknowledged had fallen behind in the mobile era.

"The Windows strategy, there's no change, except we want to be known as the innovative company that's coming from behind in some categories," Nadella told reporters in an ad hoc question and answer session after the presentation, another sign of new openness at the company.

"If you look at the story of Windows, we lead in some, we have fallen behind in some. We're grounded in that reality," he said. "What we need to be is a challenger there and be able to show what we're capable of doing in these new form factors."

Apart from the absence of any Windows devices, the Surface, one of Ballmer's prized concepts, was conspicuously missing from a show floor at the event that included Google Inc Android tablets from Samsung and Acer as well as the iPad. Nadella did not mention the poor-selling tablet at all in conversations with reporters.

The Office apps are free to download from Apple's app store, but to create new documents, users will need a subscription to Microsoft's existing cloud-based service called Office 365.

Microsoft's Office 365 Home Premium, designed for home consumers, costs $100 a year. For businesses it costs $60 or more per year, depending on features.

"Welcome to the #iPad and @AppStore!" Apple Chief Executive Officer Tim Cook tweeted after the announcement. "Thanks @tim_cook, excited to bring the magic of @Office to iPad customers," Nadella tweeted back.

Analysts have estimated that Microsoft could rake in anywhere from $840 million to $6.7 billion a year in revenue from iPad-native Office, although some fear it may have moved too late to grab the attention of many.

Easy to use, touch-friendly work apps like Haiku Deck, Quip, Smartsheet and Evernote, not to mention Google Apps, have quickly gained a following among younger users who have never worked with Office applications, or relish the change.

Sources have said an iPad-friendly version of Office - which encompasses such popular applications as Word, Excel and PowerPoint - had been ready for years, but the Redmond, Washington-based company had been reluctant to compromise its signature PC operating system. At the time, the sources could not speak because they were not authorized to talk to the press.

However, Microsoft's own efforts to produce a touch-friendly operating system capable of challenging the iPad have floundered, with poor sales of its Surface tablet, and a general lack of interest from third party hardware makers in making tablets running Windows 8.

Nadella's willingness to break with the Windows tradition, which remains co-founder Bill Gates' most enduring legacy, helped spur Microsoft shares to $40-plus levels not seen since the dotcom boom of 2000.

Wall Street is now guardedly optimistic on a company that, while still garnering billions of dollars in annual profit, risks gradual obsolescence in a mobile-powered tech industry.

To some investors, steering a new course for such a massive entity - Microsoft is the second-largest US tech company by market value - is a daunting task. Before Nadella's appointment, some investors had hoped for an outsider open to change to take the reins.

But bold moves with Office, and signifying a renewed drive to conquer the mobile arena and 'cloud' computing after years of shackling its best products to PC-centric Windows, are seen as a promising start.

"He talks the talk," said Ives at FBR, referring to Nadella. "Now the big question is, will he walk the walk?"