As with other Nokia phones, the camera is supposed to be the hero for the Lumia 925 as well. The phone has an 8.7 MP camera with Carl Zeiss lens. 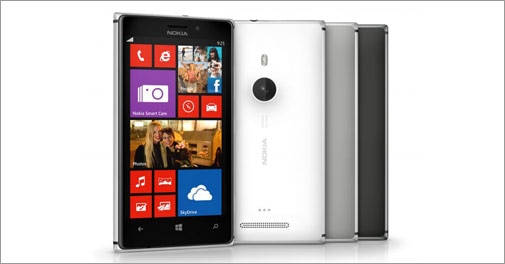 The Nokia Lumia 925, an update to the Lumia 920 lost its sheen when a much superior Lumia 1020 was announced days after its launch. Even in India, the phone will soon start competing with the Lumia 1020, which is expected to hit the market in a couple of weeks. So what is it that will set this Nokia flagship phone apart?

Looks:  Like other Nokia flagship smartphones, the Lumia 925 too has a simple, straight line design. However, it is slimmer and lighter than its predecessor, the Lumia 920. In fact, it is just 8.5mm thin and weighs 139 grams. The 4.5-inch AMOLED display has a 768x1280p resolution and is cased in a aluminium frame with a polycarbonate back. The volume, power and camera keys are all placed on the right bezel, with touch keys for back, windows and home below the display.

Camera: Like with other Nokia phones, the camera is supposed to be the hero for the Lumia 925 as well. The phone has an 8.7 MP camera with Carl Zeiss. Though there is a Pureview branding at the rear, this one does use the oversampling technique that Nokia introduced with the 808 PureView. Images are captured at 3264x2448p resolution with a camera that has some basic shooting modes. We found that the images captured during bright daylight appeared good with natural colours. We encountered issue while locking the focus indoors, despite the focus assist light. But there is no doubt that low-light photography is the USP of this Lumia too. The images we captured in a pitch dark room with flash had hardly any noise. This is thanks also to the optical image stabilizer. Other effects like onboard include motion blur and action lens are also good.  However, with the Lumia 925 in landscape mode we ended up hitting the back key quite a lot, closing the camera app. Beyond the regular camera settings, the Smart Cam Lens app can be set up as the default camera app. It can capture 10 photos in a single burst and let you choose the best or combine all into one.

Performance: The 925 runs Windows Phone 8 from Microsoft with the Amber update. This means the phone has FM radio, enhanced camera software, the Smart Camera app, double tap to unlock gestures and the flip to silence gesture. Browsing with Internet Explorer was smooth and we also liked the HERE Drive+ and HERE Maps. However, the platform still lacks many popular apps and is not capable of active multitasking. When one exits an app, it goes into the standby mode. But unlike Android, WP8 is not a power hungry OS and works well with a dual-core chipset. The Lumia 925 is powered by a 1.5GHz dual core Snapdragon S4 processor coupled with 1GB RAM. The onboard storage is 16GB and there is no option to expand memory.

Battery: The 2000 mAh battery on the Lumia 925 was good enough to survive a day with excessive use of the camera and average browsing, social networking and some calls. If used carefully, it can give a few more hours of juice.