Targeting users in the northern region and tier-2 and tier-3 cities of the country, StarPick Fantasy will introduce Hindi language support to its platform in the next couple of days. 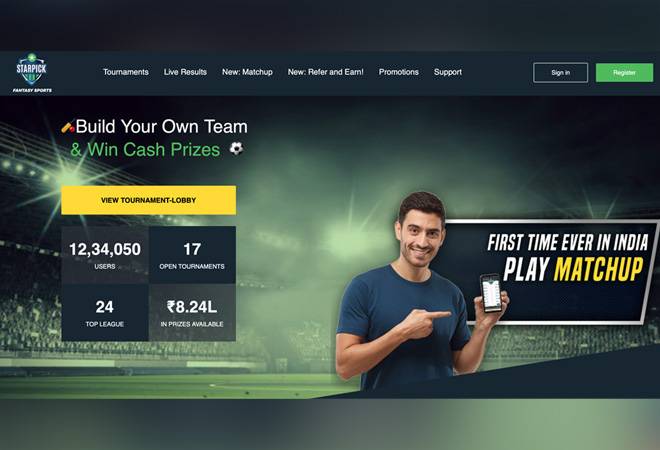 Targeting users in the northern region and tier-2 and tier-3 cities of the country, StarPick Fantasy will introduce Hindi language support to its platform in the next couple of days. To be accessible on both, the website and the application, the company also plans to extend it to other Indian languages including Telugu, Kannada, Malayalam, and Tamil in a month's time.

Just recently, StarPick Fantasy had introduced an easy to understand, skill-based sports gaming format Matchup. This format tests users' skill and knowledge in a unique way that helps them win instead of competing against thousands of others. There are pre-set duels between players of a team for the particular day. In order to participate in the Matchup, a user needs to select a minimum of 4 duels and up to a maximum of 10 duels. The company also plans to introduce an innovative gameplay format called Pick'em during the World Cup. Some other innovative gameplay formats introduced by StarPick Fantasy include Flexi Five - pick any 5 players, Cricket Heroes - user has to pick 3 players (one Batsman, one Bowler and one All-Rounder), H2H - create own challenge and go head-to-head with a friend or any StarPick user and Season Game - a multiple gameweek tournament can also be a "season game".

StarPick Fantasy is a popular sports fantasy platform in India, which is registered in the UK and has its technology teams based out of Norway and Sweden. Founded in March 2018, this fantasy sports platform has a user base of over 1.2 million in India. It expects approximately 3.5 million users by IPL 2020 and 5 million users by T20 World Cup in 2020. It started with IPL Season XI followed by Football World Cup, European Football, and Pro Kabaddi League, Major League Baseball and it will be adding UFC Formula 1 to the platform. The company claims that various international sportspeople have been associated with the brand, naming Harbhajan Singh, Gautam Gambhir, VVS Laxman, Rohit Sharma, Jonty Rhodes and Sunil Chhetri. At present - Rohit Sharma, Jonty Rhodes and England Captain Eoin Morgan are the brand ambassadors. Since its inception, StarPick Fantasy has awarded Rs 10 crore to winners and has a budget of Rs 3 crores for winnings only for the ongoing Men's Cricket World Cup 2019.

Mukherjee adds, "At StarPick, it is our constant endeavour to disrupt and redefine fantasy gaming in India as well as keeping the users engaged using cutting-edge technology and innovation. We recently launched Matchup, a radical and innovative game on our platform. Globally this concept is very new and it is now available to our users in India through StarPick. Our partnership with NASDAQ-listed Scout Gaming Group empowers us to innovate and compete with globally leading sports engagement platforms. We will soon be launching another revolutionary and innovative gameplay called Pick'em during the World Cup. We believe our users will love this new format and test their skills and knowledge to get rewarded financially. My message to users is 'keep skilling it'."

e-gaming is gaining traction in India. According to the KPMG and IFSG report on 'The Evolving landscape of sports gaming in India', the online gaming revenues have nearly doubled over a four-year period, reaching Rs 4,380 crore in FY18. It is expected to grow at a CAGR of 22.1 per cent and touch Rs 11,900 crore by 2023. The report also highlights that two out of three sports fans in India are aware of fantasy gaming today, and an estimated 100 million will take to one or more of the platforms/apps by the end of 2019.