Both Twitter and the Times said they were resolving the attack, which actually hit an Australian company that registered their domain names, Melbourne IT. 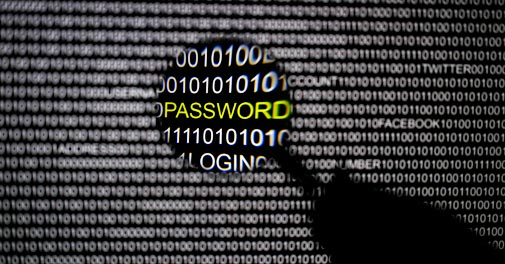 Readers who tried to click on the New York Times' website got nothing but error messages on Tuesday afternoon during the site's second major disruption this month, and people also had trouble accessing Twitter. A hacker group calling itself the "Syrian Electronic Army" claimed responsibility.

Within minutes of the attack, the New York Times quickly set up alternative websites, posting stories about chemical attacks in Syria. "Not Easy to Hide a Chemical Attack, Experts Say," was the headline of one.

The cyberattacks come at a time when the Obama administration is trying to bolster its case for possible military action against Syria, where the administration says President Bashar Assad's government is responsible for a deadly chemical attack on civilians. Assad denies the claim.

"Media is going down..." warned the Syrian Electronic Army in a Twitter message before the websites stopped working, adding that it also had taken over Twitter and the Huffington Post UK.

Times spokeswoman Eileen Murphy said the disruption was caused by a "malicious external attack" that affected its website and email, while Twitter spokesman Jim Prosser said viewing of images and photos were sporadically affected. Huffington Post UK did not respond to requests for comment.

Both Twitter and the Times said they were resolving the attack, which actually hit an Australian company that registered their domain names, Melbourne IT.

Melbourne IT spokesman Tony Smith said a reseller's username and password were used to access several domain names on that reseller's account. Several of those domain names were changed, including the Times' domain.

"We are currently reviewing our logs to see if we can obtain information on the identity of the party that has used the reseller credentials, and we will share this information with the reseller and any relevant law enforcement bodies," Smith said in an email.

"We will also review additional layers of security that we can add to our reseller accounts," he added.

Tracking the hack even further, computer forensics from security firm Renesys Corp. traced the Internet protocol addresses back to the same ones as the Syrian Electronic Army's website sea.sy, which the firm said has been hosted out of Russia since June.

A Syrian Electronic Army activist confirmed to The Associated Press that the group hijacked the Times' and Twitter's domains by targeting Melbourne IT.

"I can't say how, but yes we did hit Melbourne IT," the hacker said in an email. No further details were disclosed.

The Syrian Electronic Army has, in recent months, taken credit for Web attacks on media targets that it sees as sympathetic to Syria's rebels, including prior attacks at the New York Times, along with the Washington Post, Agence France-Press, 60 Minutes, CBS News, National Public Radio, The Associated Press, Al-Jazeera English and the BBC.

FBI spokeswoman Jenny Shearer in Washington said the agency has no comment on Tuesday's attack.

Tuesday's victims were hit by a technique known as "DNS hijacking," according to Robert Masse, president of Montreal, Canada-based security startup Swift Identity.

The technique works by tampering with domain name servers that translate easy-to-remember names like "nytimes.com" into the numerical Internet Protocol addresses (such as "170.149.168.130") that computers use to route data across the Internet.

Domain name servers work as the Web's phone books, and if attackers gains access to one, they can funnel users trying to access sites like The New York Times or Twitter to whichever rogue server they please. Masse said DNS attacks are popular because they bypass a website's security to attack the very architecture of the Internet itself.

"Companies spend a lot of time, money, resources and defending their servers, but they forget about auxiliary infrastructure that is integrally connected to their networks, like DNS."

Cybersecurity experts said hijacking attacks are preventable if website administrators are meticulous about what code they bring into their sites.

"As this incident illustrates, any time you integrate third-party code into your site, it presents a new attack vector for hackers. You must not only ensure your own code is secure, but you must also rely upon third parties' security practices," said Aaron Titus, a privacy officer and attorney at New York-based privacy software firm Identity Finder.

Michael Fey, a chief technology officer at Santa Clara, Calif.-based cybersecurity firm McAfee, said that as long as media organizations play a critical role as influencers and critics, they will continue to be targets of cyberattacks.

He said the battle tactics are broad, from denial of service attacks, to targeted attacks using social engineering and to deploying information-gathering Trojans.

"Regardless of technology or tactics deployed, we should expect to see more of these attacks," he said.

How messaging apps are expanding their user base