After introducing dark mode on phones this year only, WhatsApp will soon come up with the same feature on desktops and laptops as well. 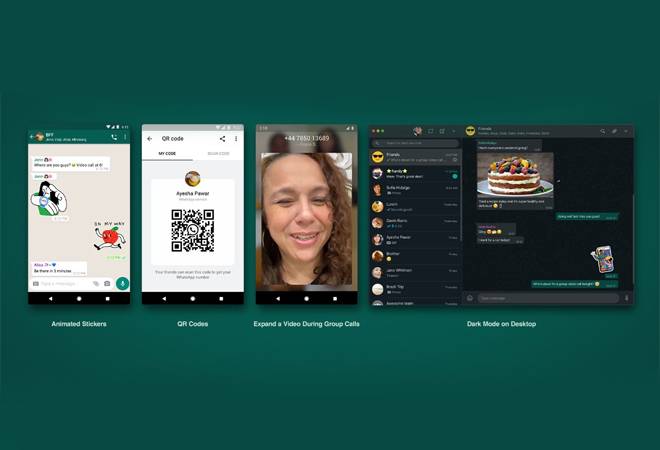 The instant messaging app, WhatsApp, on Thursday announced a couple of new features for its users. The features include animated stickers, dark mode for WhatsApp for web, QR codes, improvements to group video calls, and status for KaiOS. After introducing dark mode on phones this year only, WhatsApp will soon come up with the same feature on desktops and laptops as well.

The Facebook-owned app has improved the group call video feature. The platform said it has made it comfortable for the users to focus on whoever they want to include in their video chats by letting them press and hold to maximise a participant's video to full screen. WhatsApp had recently extended group video call participants to eight from four. Additionally, WhatsApp is also adding a video icon in group chats of 8 or less, so users can easily start a group video call with one tap.

All these features will be rolled out over the next few weeks, in the latest versions of WhatsApp.

QR codes: With this feature, a user will be able to add someone in his/her contact list by scanning QR code

Dark mode for WhatsApp web and desktop: The Dark Mode theme will now be extended to computers

Improvements to a group video call: With now up to 8 people on a video call, WhatsApp has made it easier to focus on whoever someone wants to talk by pressing and holding to maximize a participant's video to full screen

Status comes to KaiOS: KaiOS users can now enjoy the popular feature that lets you share updates that disappear after 24 hours.

India can even do 'digital strike': Ravi Shankar Prasad on China apps ban