Over half of Yahoo! users on mobile: Marissa Mayer

More than half of the total 800 million monthly users of Yahoo! access it on their mobile phones, CEO Marissa Mayer said. 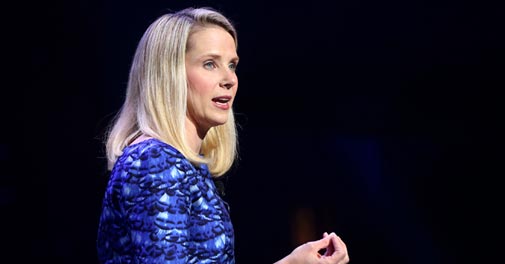 More than half of the total 800 million monthly users of Yahoo! access it on their mobile phones, CEO Marissa Mayer said.

Mayer, while unveiling a suite of services covering digital advertising, food and technology, also announced the acquisition of Aviate, a mobile solutions company, in her keynote address at the CES 2014 on Tuesday.

"We have been hard at work re-imagining Yahoo!'s core businesses across search, communications, media and video, all powered by two powerful platforms, Flickr and Tumblr. The response has been tremendous.

"This fall, for the first time ever, we surpassed 400 million monthly mobile users, which is about half of our 800 million total monthly users," she said.

Mayer stressed on the transformation of the firm from a technology company to a media, news, entertainment and advertising platform utilising products focusing on search, communications, digital and videos.

She also launched News Digests, which will deliver top news events twice daily to users as well as digital magazines.

The company said the acquisition of Aviate, which develops mobile solutions especially for Android, will aid users to find local and personalised data. No financial details of the acquisition were revealed.

Mayer said Yahoo! is focused on mobile and is guided by the amount of time people spend on their handheld devices.

"Weather, mail, finance, news, mobile puts them in your pocket and makes them a daily habit. We acquired Aviate because we believe home screens should be smarter and more personalised," she added.

It is Yahoo!'s first acquisition this year. The company bought about 28 start-ups in 2013, including the USD 1.1 billion purchase of photo blogging site Tumblr.

Since Mayer joined the firm in 2012, Yahoo! has acquired over 30 start-ups.

Yahoo! plans to make Aviate technology a central part of its Android-based experiences and will continue to develop the product, the California-based firm said.

The company also announced its new, unified suite of digital advertising products for premium and audience-focused display, native and search advertising, which are accessible through a new buying platform.

The 2014 International CES has opened with participation from over 3,200 exhibitors, including top technology firms.

Product announcements have been made by companies such as Samsung, LG, Panasonic, Sony, Audi, Toyota, Ford, Intel, Huawei, Sharp and Audi.
(PTI)