Nokia is upgrading its home entertainment portfolio in Europe for now with the latest Android-based streaming box. 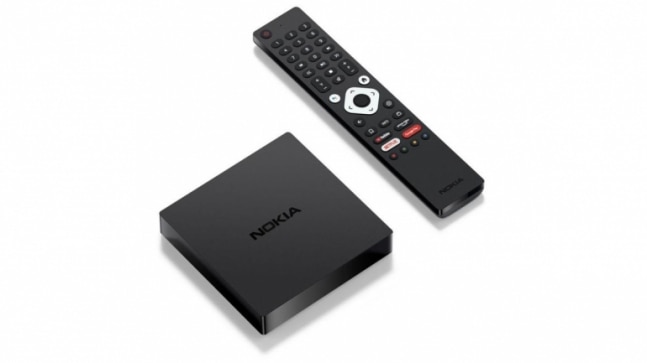 Nokia is launching a new streaming box for European markets. Called the Nokia Streaming Box 8000, the new media device for televisions comes with Android 10 software, which means it brings the latest features system-wide and inside different apps that might have them ready for big screens. The streaming box will plug into your television and make it smart instantly. It uses a Wi-Fi connection for the internet.

The new Nokia Streaming Box 8000 is the latest product from Streamview, which holds the license to sell a select range of Nokia devices in Europe. This is similar to how Flipkart sells Nokia TV and Nokia Media Streamer in India. This is also why the Streamview's new Nokia streaming device will be available in select markets in Europe and it is highly unlikely it will make it to other markets, Android Authority has reported.

The Nokia Streaming Box 8000, in fact, is not officially available yet. Folks at Android Authority got their hands on the device ahead of the launch. The official price is still not available but that would be somewhere around EUR 99 (roughly Rs 8,700), according to the report. We also have the first look at the retail box of the Nokia Streaming Box 8000 that shows the device in its entirety.

Contrary to the Nokia Media Streamer available in India, the Nokia Streaming Box 8000 comes with support for 4K video resolution. The remote control that comes bundled with the device is backlit and has hotkeys for Google Assistant, Google Play, Netflix, Amazon Prime Video, and YouTube. It is not a small remote, much like the ones you get from Xiaomi or Amazon for their streaming devices. It is a full-fledged remote control with numerical buttons among others.

Some extra information such as Dolby Vision and Dolby Audio support is not available immediately. But since Nokia Media Streamer available in India brings support for Dolby Audio, we can safely assume the European model has this feature, as well. Although, I am not sure about the Dolby Vision yet. In case, it is available, it will make the streamer an even better deal. A large portion of customers consumes Netflix and Amazon Prime Video content that is available in Dolby Vision, which the streaming box will take care of.