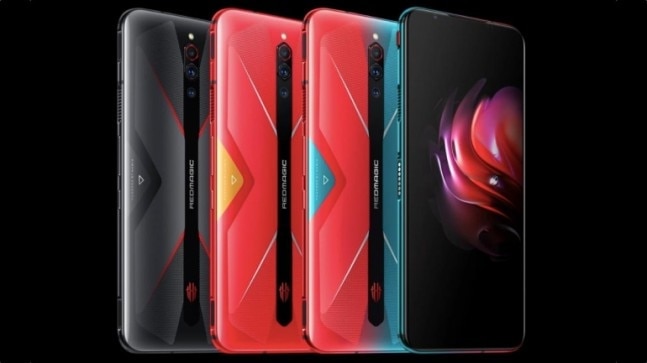 Nubia Red Magic 5 was launched in China last month with a horde of top-of-the-line specifications that are aimed at prolific gamers. The smartphone has now debuted to global markets, Nubia has announced. The Red Magic 5 has been listed on the company websites for the US, Canada, Australia, Europe, the UK, Israel, Singapore, Hong Kong, Japan, Indonesia, Taiwan, and Macau. Unfortunately, the Nubia Red Magic 5 has not been listed on the company's India website and we are not sure if the smartphone will be launched for Indian buyers.

Launched in China initially, the Nubia Red Magic 5 has four variants but the global markets will be getting just the two of them. Nubia Red Magic 5 will be available in an 8GB/128GB model for $579/EUR 579/GBP 539 in Eclipse Black and Hot Rod Red colours, and a 12GB/256GB version in Pulse Neon colour for $649/EUR 649/GBP 599. The Nubia Red Magic 5 will start selling globally on April 21, the website has mentioned. Nubia is also doling out what it is calling Blueprint, which allows the first 100 buyers to get a $30 voucher for $5.79 that can be redeemed at the purchase. Moreover, four of the first 100 buyers will be chosen for an extra $20 voucher, which takes up the total voucher value to $50.

The Nubia Red Magic 5 comes with a 6.65-inch AMOLED FHD+ display (1080 x 2340 pixels) with a 144Hz refresh rate and a screen touch response rate of 240Hz. The display has an aspect ratio of 19.5:9. The smartphone is powered by an octa-core Qualcomm Snapdragon 865 SoC, paired with an Adreno 650 GPU for graphic performance. It has up to 12GB of LPDDR5 RAM and 256GB of UFS 3.0 internal memory for the global markets. In China, however, the top variant has 16GB of RAM and 256GB of storage. The storage cannot be expanded on the Red Magic 5. The smartphone supports dual-mode 5G and comes with Active Liquid-Cooling with Turbo Fan 3.0.

For photography, the Nubia Red Magic 5 has a combination of a 64-megapixel Sony IMX686 sensor, an 8-megapixel secondary sensor, and a 2-megapixel tertiary sensor. It supports up to 8K video recording and slow-motion video recording at 1080p 240fps. There is an 8-megapixel front-facing camera on the smartphone as well. The Red Magic 5 runs Android 10 out of the box. It has a USB 3.0 Type-C port, a dual Nano-SIM card slot, and a 3.5mm headphone jack. There are shoulder trigger buttons as well with 300Hz touch sampling rate, dual-pressure touch. There is a 4500mAh battery that charges at up to 55W quick charging via a separately sold charger.

Motorola Edge, Edge Plus coming soon: Should you watch out for these OnePlus 8 series rivals?