OnePlus 8 series is expected to launch in April. The entire spec sheet of the two phones has leaked ahead of the launch. Here's all you need to know about them. 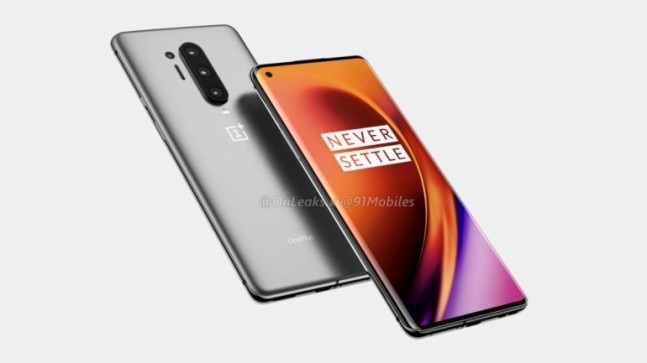 Although we're at least a month away from the launch of the OnePlus 8 series of phones, we may have our first look at the spec sheets of the upcoming devices -- OnePlus 8 and OnePlus 8 Pro.

The two phones have seen themselves leaked online courtesy of known tipster, Ishan Agarwal who claims to have revealed all about the upcoming flagships from OnePlus. Although there is no way to verify the information that he has shared, the details mentioned in the leak appear quite believable.

As per the tipster, the Pro variant of the OnePlus 8 will bring with itself a massive display that will be 6.78-inches in size. The panel has been revealed to support up to Quad HD+ resolutions. However, the most interesting feature of the display would be its support for 120Hz refresh rate.

Under the hood, the OnePlus 8 Pro is being claimed to come running a Snapdragon 865 chipset with support for 5G. This, the leak claims will be paired with either 8GB or 12GB of RAM and 128/256GB of storage UFS 3.0 storage.

Exclusive: They're coming! Here is the full specification list of the #OnePlus8 & 8 Pro. Seems like #OnePlus8Pro is gonna be a beast with 6.78" 120hz QHD+ Display and 48+48+8+5MP Camera Setup. Will have 30W Wireless Charging & IP68 Rating too. I'm so excited! #OnePlus8Seriespic.twitter.com/j1AAo19q4J

In contrast, the OnePlus 8 will get a slightly smaller 6.55-inch Full HD+ display which will only support refresh rates up to 90Hz. Under the hood, the core configurations will remain the same, with the OnePlus 8 also packing the Snapdragon 865 5G chipset paired to up either 8GB/12GB RAM and 128GB/256GB UFS 3.0 storage depending on your variant of choice.

There will be slight changes to the camera set-up, with there only being triple cameras on the OnePlus 8. The primary lens will be 48-megapixel in size, with a 16 and a 2-megapixel lens completing the set-up.

The battery is claimed to be smaller too, with it maxing out at 4300mAh and providing 30W Warp Charge support, but no wireless charging. There will also be no IPS rating on the non-Pro model of the OnePlus. The phone is tipped to be made available in three colours at launch --Blue, Black and Green.