The OnePlus 8 series includes the OnePlus 8 and OnePlus 8 Pro. Some rumours also suggest there could be a OnePlus X in the making. 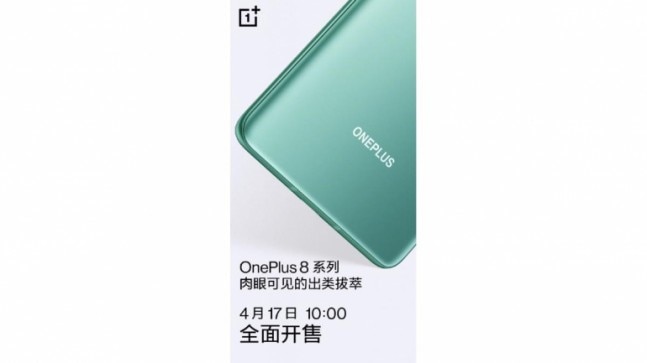 OnePlus 8 series is set to launch on April 14 and we are already witnessing the hype around it built created on a large scale. It will be launched via an online event for global markets, including India. But for China, OnePlus is holding a separate event on April 16 to launch the OnePlus 8 phones. The company has now announced the sales of its OnePlus 8 series phones will begin on April 17 at 10 am local time. The reservations, however, are already up for buyers in China via the company website, Jingdong mall, and Tmall, according to OnePlus's post on Weibo. The global sales, however, are expected to begin April 30.

The OnePlus 8 series includes a vanilla OnePlus 8 version and a OnePlus 8 Pro, much like the company's past few smartphone series. A major departure this time will be the wireless charging capability that is coming to OnePlus 8 Pro. The previous OnePlus phones have missed out on wireless charging -- something that the users have demanded extensively and is also crucially needed if OnePlus is still at its fight against the rivals such as Samsung and Apple. The cameras on the OnePlus's 2020 phones have also been improved, along with a horde of other enhancements.

OnePlus 8 Pro is said to come with a 6.78-inch QHD+ Super Fluid AMOLED display with up to 120Hz refresh rate. It will be powered by a Qualcomm Snapdragon 865 SoC paired with up to 12GB of RAM and 256GB of internal storage. It will have a setup of two 48-megapixel sensors and an 8-megapixel sensor at the back while a 16-megapixel front-facing camera will be mounted on the front. OnePlus 8, on the other hand, will have a 6.55-inch FHD+ Fluid AMOLED display with up to 90Hz display, Snapdragon 865 SoC, up to 12GB of RAM, 256GB of internal storage, triple cameras (48-megapixel, 16-megapixel, and 2-megapixel) on the back, and a 16-megapixel camera on the front.

Coronavirus pandemic: No community transmission in India, WHO admits error