OnePlus recently launched two new smartphones in India: the One 8 and OnePlus 8 Pro. Of the two, the OnePlus 8 Pro is a full-on premium segment device, one that doesn't even attempt to pass itself off as a flagship killer anymore. Clad with a 6.8-inch display with curves on the sides, a burden-less design and a 5G enabled Snapdragon 865 chipset, the OnePlus 8 Pro is a premium offering that not only performs like a flagship but also looks like one. However, starting at Rs 54,999, it still isn't for everyone.

On the other hand, the OnePlus 8 with its entry variant retains many of the premium design and performance features, and crucially in the context of the Indian smartphone market, also manages to stay competitive with a price tag of Rs 41,999.

The aggressive price tag sees the OnePlus 8 placed in a segment that's arguably one of the most fiercely contested in the market, as it pits it against challengers such as Google's Pixel 3a, iQOO 3 and the Lite variants of the Galaxy Note 10 and S10 from Samsung.

While all these devices do pose a challenge to the OnePlus 8's claim to being called the king of the mid-segment flagships, it is the Galaxy Note 10 Lite with its S Pen that poses a unique challenge. This is because the smartphone doesn't aim to woo consumers with its hardware, which is not shabby at all, but with the iconic S Pen. In a way, on this occasion, the contest is between top-of-the-line hardware of the OnePlus 8 and the versatility of the S Pen in the Galaxy Note 10 Lite. 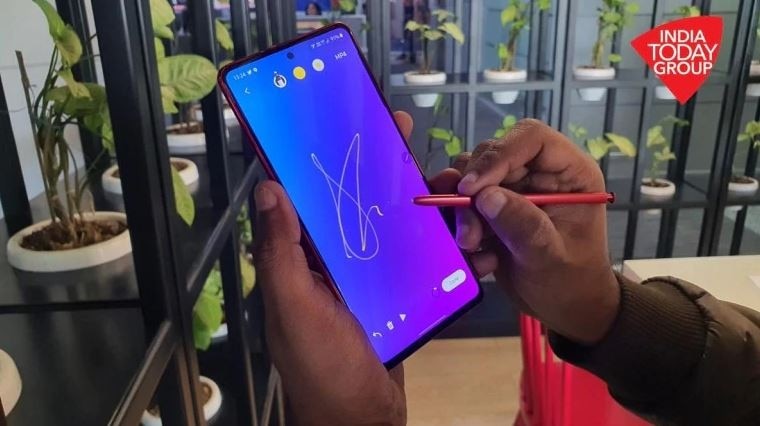 While both the phones offer impressive design, it is definitely the OnePlus 8 that looks more attractive, more polished, and has better build quality. The OnePlus phone looks more premium because of it uses toughened glass as the primary material of choice, while the Galaxy Note 10 Lite only uses "glastic" -- a material that Samsung claims looks like glass despite essentially being plastic.

Apart from the materials of choice, the design language of the OnePlus 8 also looks more fluid, with curved edges, and is in sync with the times. The Galaxy Note 10 Lite, on the other hand, feels more blocky and is quite frankly crafted using a script that's getting a bit stale at the moment.

One of the most interesting things about the Galaxy Note 10 Lite is the fact that it comes with a massive display. The Galaxy Note10 Lite offers a wide 6.7-inch Super AMOLED edge-to-edge Infinity-O display with an aspect ratio of 20:9, running at a maximum Full HD+ resolution. The screen also flaunts very little in terms of bezels, and also uses a single punch-hole Infinity-O display to enhance user experience. The overall result is that the Note 10 Lite sports an impressive display, which in my opinion edges out the display of the OnePlus 8.

Not that OnePlus 8 has a shabby display. The OnePlus 8 comes with a screen that might be slightly smaller in size but offers impressive performance and feature set. In comparison to Samsung Note 10 Lite's panel, the OnePlus 8 comes with a smaller 6.55-inch FullHD+ Fluid AMOLED display, with an aspect ratio of 20:9 and a pixel density of 402ppi. It also offers consumers 90Hz faster refresh rate, something that is not there in the Note 10 Lite display.

While we are yet to test the OnePlus 8, the fact that it brings with itself a core configuration of 6GB RAM and 128GB storage, paired to the fast Snapdragon 865 chipset, should make it one of the fastest phones in the market. It is important to note that OnePlus 8, like other OnePlus phones, comes with UFS 3.0 storage which is faster than the storage that most phones carry within them. The combination of a fast chipset, plenty of fast RAM and fast UFS 3.0 storage means that OnePlus 8 is going to offer impressive performance.

Having said that, it cannot also be ignored that the Note 10 Lite hides under the hood some serious firepower. At the core of the device is a Samsung Exynos 9810 SoC -- 10nm 64-bit Octa-core processor (Quad 2.7GHz + Quad 1.7GHz) paired to 6GB of RAM.

Our impression is that in terms of performance, OnePlus 8 is going to be better. The only question here is: does it matter because Note 10 Lite is not a slow phone. We think it all comes down to you: If you value performance above all else, OnePlus 8 will be the way to go.

The OnePlus 8 too comes with a three-lens set-up -- but one that appears much more powerful on the spec sheet at least. Of the three cameras, the primary is a 48-megapixel lens that's a trusted Sony IMX586 sensor. The secondary is an ultra-wide 16-megapixel lens, while the third sensor completing the module is a 2-megapixel macro lens.

While it's true camera performance of phones can never be gauged without actually comparing shots clicked by them. However, considering we found the Galaxy Note 10 Lite cameras just passable during our review of the device, and that the OnePlus 8 on paper bringing the more powerful camera set-up of the two, our vote here would go for the OnePlus.

Battery and other features: OnePlus 8 vs Galaxy Note 10 Lite

Keeping the lights on the OnePlus 8 is a massive 4300mAh, which misses out on support for wireless charging but can be fast charged through the OnePlus 8 Warp 30T supporting Type-C port. The phone also gets support for 5G in supported countries -- a feature that is really of no use for buyers in India right now.

In comparison, the Galaxy Note 10 Lite gets a bigger battery, which also happens to be one of the biggest battery packs on a top-end Samsung phone to date. Inside the Note 10 Lite there is the big 4500mAh battery capable of fast charging. Just like the OnePlus 8, the Galaxy Note 10 Lite too doesn't support wireless charging. In terms of battery usage, our feeling is that the Note 10 Lite is going to offer a slightly better battery life. But just like the performance part, the difference in the battery may not matter much because both phones would be good enough for day-long use.

Coming to features, we think that that Note 10 Lite has one advantage. That is the unique S Pen. Not only does the S Pen help the Galaxy Note 10 Lite look cool, but it also allows users to personalise photos and videos with dynamic drawings, effects and animations and instantly converts handwritten notes to digital text. The Air Command feature of the S Pen allows users to click pictures, navigate through presentations and even edit videos with a simple click. For the users who need these features, or can utilise these features effectively, the S pen is almost indispensable. Which one is better at this price? It all comes down to one thing: Do you need the S Pen, and features it brings? If you do, get the Note 10 Lite. With it, you not only get the S Pen support but also a very capable smartphone. But if you don't need the S Pen, get the OnePlus 8. It is a newer phone, with better hardware, and marginally a better phone than others in this price segment.