OnePlus 8T launch date is October 14: Snapdragon 865 Plus, 120Hz AMOLED screen, and everything else to expect

OnePlus 8T is finally seeing the light of day next month after a deluge of rumours and leaks that have poured in over some time recently. 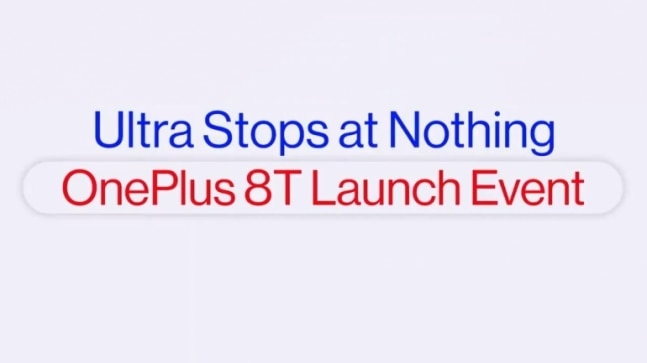 OnePlus 8T 5G is launching towards the middle of October.

OnePlus 8T launch date is finally out. The next smartphone in the flagship series of OnePlus will go big on performance, camera, and, of course, the software. Even the company is suggesting that "Ultra Stops at Nothing", which suggests the 120Hz UltraSmooth display -- something that several leaks have pointed. Rumours are also rife that the OnePlus 8T 5G will be powered by a Qualcomm Snapdragon 865 Plus processor -- the most advanced and fastest processor for Android phone to date. It is going to be a significant upgrade over the OnePlus 8 in terms of gaming and other memory-intensive tasks.

In a release, OnePlus announced it is holding an event on October 14. In India, the event will begin at 7.30 pm. It is going to be an online event, so everyone will be able to catch up real-time updates over the live stream. Amazon already listed the smartphone prematurely so we are expecting it is going to be sold on via the e-commerce website initially. The OnePlus 8T 5G might also be available via offline stores later but nothing is known about that as of now.

The OnePlus 8T 5G comes months after the OnePlus 8 was launched. There was a mid-tier OnePlus Nord that debuted a while back for people who were tight on budget but needed OnePlus' excellence for its smartphones. People who want more and the best from their OnePlus phone will get it in the form of the OnePlus 8T.

"OnePlus is always looking for opportunities to bring the latest technology to our tech-savvy users as soon as we feel it meets our high standards," said Pete Lau, Founder and CEO of OnePlus. "With the upcoming OnePlus 8T, we are once again raising the bar for ourselves in terms of the overall user experience, thanks to some new features that we are excited to introduce for the first time in a OnePlus device. I am confident that the OnePlus 8T will once again exceed expectations and deliver an unparalleled flagship experience."